Humberside Police has defended its officers from tabloid criticism after they were photographed riding the dodgems at Hull Fair. 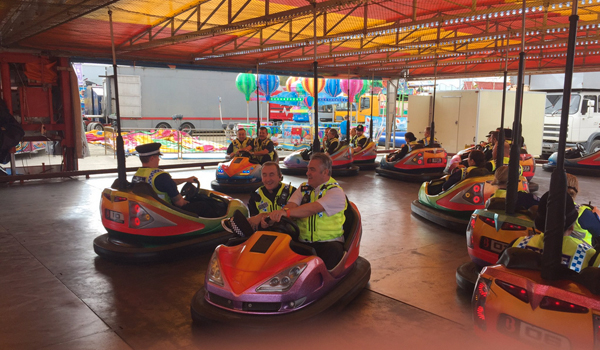 Humberside Police has defended its officers from tabloid criticism after they were photographed riding the dodgems at Hull Fair. The Sun published images from an officers Twitter feed of more than 15 colleagues having fun at the fair to attack the forces use of resources. The article claimed that they had sparked uproar among the public by enjoying fairground thrills on duty instead of watching for crime. Deputy Chief Constable Andy McDyer said he was sad to see a negative slant on officers taking a five-minute break and engaging with fairground organisers before the event had fully opened. The force has been supported by members of the public as well as the Hull Daily Mail, which said it thought officers had earned five minutes of fun. More than 25 officers were deployed to patrol the eight-day Hull Fair, including armed police. Just four people were arrested over the course of the event, which was visited by hundreds of thousands of people. Mr McDyer said: Our officers, PCSOs and volunteer special constables worked long, hard hours during the event, some working nine consecutive ten-hour shifts and they were able to enjoy a ride before the fair leaves Hull for another year. Throughout the week-long event, where Hull hosts one of the largest travelling fairs in Europe, we have received overwhelming positive feedback from both visitors to the fair and those following us on social media. Keith Hunter, police and crime commissioner for Humberside, added that people are not furious over the officers actions but are angry that you got paid to sit in an editorial meeting yesterday and said this would make a great front page.