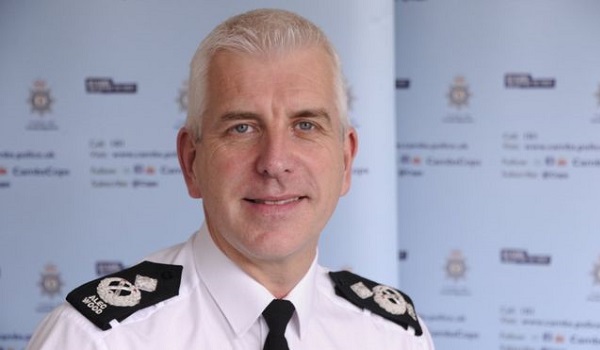 A second force has announced plans to cut police community support officer (PCSO) roles and hire more officers in response to mounting pressure. Cambridge Constabularys new proposed operating model will swell its police officer numbers by 50 at the cost of 46 PCSOs. The restructure  launched just weeks after Norfolk Constabulary revealed plans to remove its PCSO function entirely  could allow the force to balance its budget over the next four years by delivering £3.1 million in savings. The new model is the result of a review of local policing in Cambridgeshire that sought more efficient ways of responding to a 25 per cent rise in recorded crime. Chief Constable Alec Wood believes his forces current model is no longer sustainable given current levels of demand. He said: Like forces across the country, Cambridgeshire faces an unprecedented workload and, as a result, officers and staff are working long hours and juggling heavy workloads. We remain committed to protecting the most vulnerable people and targeting the most serious offenders. But this means we have to be realistic about what we can and cannot attend, and make some difficult decisions about our future structure. The focus of this review and the proposed model is putting more officers on the frontline to enable us to provide the public with the best service possible. This structure will enable us to fund an additional 50 officers which will make a huge difference to the people of Cambridgeshire. Demand and resource mapping commissioned as part of the review identified a ten per cent increase in 999 calls in Cambridgeshire and a 3.5 per cent rise in recorded incidents. Recorded crime has also risen by a quarter compared with the previous year, and officers investigative workloads are now almost 30 per cent higher than at the end of August 2016. The proposed operating model would finance new officers by freezing PCSO recruitment, causing their numbers to drop from 126 to 80 through natural turnover. Local policing teams and at least one PCSO will still be accessible in each part of the force area. Last month, Norfolk Constabulary announced plans to remove its PCSO role entirely to fund new police officers and staff. If its plans go ahead, the force will lose 150 PCSOs but will gain 81 officers, with more extensive powers around arrest, interview, investigation and use of police vehicles. The annual cost of the two roles is also now almost equal at £43,600 for an officer and £39,000 for a PCSO but officers will become significantly cheaper than their colleagues over the next few years. By 2021/22, Norfolk Constabulary estimates that a PCSO will cost it £44,200 per year. Alongside changes to its workforce structure, Cambridgeshire Constabulary is considering splitting its single force model into two areas and creating a hub focused on missing, exploited and trafficked children. It also plans to establish community action teams in the north and south of the county, reduce the opening hours of its front counters, revise shift patterns and reduce its number of response bases. A consultation period over the next few weeks will ask for the views of officers and staff who will be affected by the proposed changes. The final structure will be confirmed in January and the first phase of the model is intended to go live at the end of April 2018. The announcement was welcomed by police and crime commissioner Jason Ablewhite, who said it will help the force respond effectively to the changing face of demand while maintaining its neighbourhood presence. He added: There have been some difficult decisions however I believe the new model is the right structure to both maintain neighbourhood policing whilst working with communities and partners to reduce crime.