A friendly match between Burnley FC and Hannover 96 was called off at half time following police advice as scenes of unrest led to an officer being taken to hospital with a head injury. 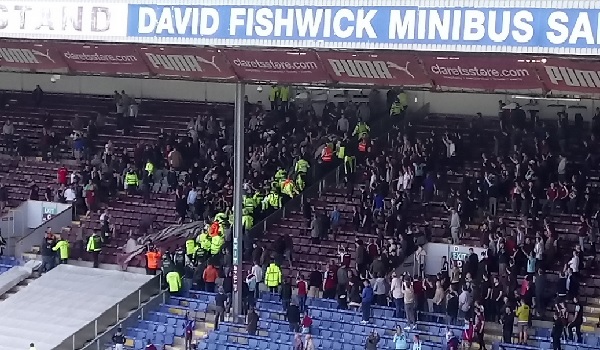 A friendly match between Burnley FC and Hannover 96 was called off at half time following police advice as scenes of unrest led to an officer being taken to hospital with a head injury. Large numbers of officers were deployed at the friendly on Saturday (August 5) based on pre-match intelligence, but Lancashire Constabulary said the behaviour of the German supporters was confrontational from the outset. Seats were ripped up and thrown towards the Premier League clubs home fans, stewards and officers policing the match at Turf Moor. Around 400 Hannover fans chanted abuse in protest against its club president Martin Kind, who has recently taken a 51 per cent stake in the club, making him hugely unpopular among the German supporters. The Clarets took the lead in the 41st minute, prompting the away fans to charge towards the Burnley supporters, which soon escalated to police officers and stewards becoming the targets. An officer was taken to Burnley General Hospital with a head injury, one steward suffered a dislocated shoulder while two more received minor injuries. As extra resources were drafted in from across the county, it was decided at half time that the game should be abandoned for the safety of everyone concerned. Burnley supporters were ordered to leave the ground, while the travelling fans were held at Turf Moor before they were escorted away from the stadium to ensure no further disorder took place. No arrests were made. Chief Superintendent Chris Bithell has asked for anyone with mobile phone footage of the events at Turf Moor to send it to Lancashire Constabulary as soon as possible. The disorder we saw has no place in football, and certainly not in Lancashire, he added. Children and families were in attendance at what was a pre-season friendly match, which should have passed peacefully and without incident  but which ended up being abandoned due to the behaviour of some of the travelling Hannover fans. Both the constabulary and Burnley FC condemn this behaviour. Overnight we have collated and trawled through footage of the disorder, but we believe there will be more people who have videos on their phones which could help with our ongoing investigation. We are now continuing to work closely with staff and managers at Burnley FC, and their co-operation has been very much appreciated. Similarly, we would like to thank the fans who co-operated and left the ground without incident once the game had been called off. Burnley manager Sean Dyche backed the decision of Lancashire Constabulary to abandon the match. He added: “Hopefully nobody has got hurt. You can`t really tell what`s going on from how far away we are, but it didn`t look ideal. You hope that`s gone out of the game and it generally has. The police called it early. No one wanted anything other than a game of football.” Following the disorder, Hannover 96 said in a statement: “Our attitude is clear: Hannover 96 condemns the incidents in the stadium and dissociates itself vehemently from any kind of violence. “The club does not yet have any clear insights into the progress of the events. This information will be gathered in consultation with the police, the hosts from Burnley and fan representatives.”