Belgium has tightened security even more to counter fears that lone attackers could strike “anywhere and at any time”  a day after a suspected suicide bomber tried to blow himself up before being shot dead at a busy Brussels railway station. 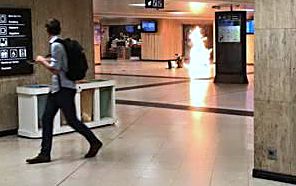 Belgium has tightened security even more to counter fears that lone attackers could strike “anywhere and at any time”  a day after a suspected suicide bomber tried to blow himself up before being shot dead at a busy Brussels railway station. A soldier killed the terror suspect, who had tried to set off a powerful nail bomb that could have led to fatalities among the two dozen or so travellers checking train times on a public display board at Brussels Central Station on Tuesday night (June 20). Similar attacks by lone assailants causing maximum mayhem but few victims have also happened in London and Paris in the past few days, putting European capitals on alert on the eve of the busy summer tourist season. The alleged attacker, believed to be aged 30 to 35, was reportedly very agitated, yelling about jihadists and then Allahu akbar, Arabic for God is great, before charging soldiers in the station foyer after his suitcase  containing nails and gas canisters  failed to fully explode, federal prosecutor Eric Van der Sypt said. After he was shot, the man “lay still” for several hours while a bomb disposal squad checked whether he was armed with more explosives. Mr Van der Sypt said no one else was injured in the incident. It was clear he wanted to cause much more damage than what happened, he added. The bag exploded twice but it could have been a lot worse. Central Station is one of the busiest in the country and soldiers could be seen patrolling there after the explosion. It was evacuated along with the Belgian capitals Grand Place, a major tourist site just 200 yards away. Trains were diverted from the station and buses sent to take passengers to their destinations. A Belgian government official said security will remain high throughout Wednesday (June 21) at Brussels rail facilities. Belgium has been on high alert since suicide bombers killed 32 people on the Brussels subway and at an airport in March last year. In three years we have been confronted with several attacks or attempts and we say the zero risk does not exist, Prime Minister Charles Michel said after a specially convened security meeting.