Flags in the air

While greatest attention is rightly given to deadly weapons, an increase in the use of less lethal guns offers the potential to identify those who go on to commit very serious offences. 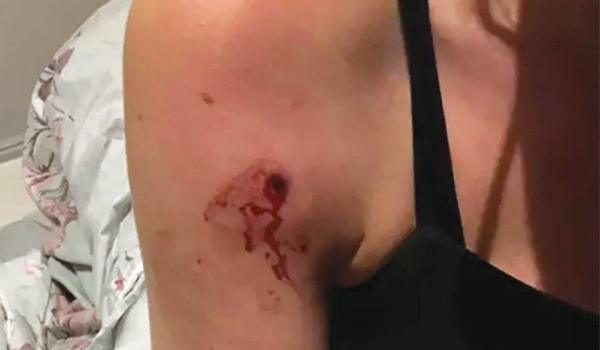 Cristina Mesder and her husband Adrian were seconds away from the rear entrance of their Northampton home when she felt a sharp pain in her upper arm. Mrs Mesder had been shot with an air rifle and the pellet had penetrated deep into her skin, leaving a blood-filled puncture wound. A second shot a few moments later missed her. The unknown sniper had fired despite the fact that Mrs Mesder was seven months pregnant and her husband was carrying the couples two-year-old son. My wife was hit on the right shoulder, Mr Mesder told his local newspaper. If that had been a bit more to the right it would have hit my son. My wife is due to give birth very soon, this has been very distressing. She asks me every time now to drop her off right outside the house. An investigation into the attack, which took place on September 30, has not been able to determine where the shots were fired from or why the Mesder family were targeted. It is, however, one of the growing number of cases involving air weapons in recent years. The most up-to-date figures available show that forces recorded 8,399 offences involving a firearm in the year ending March 2016, an increase of seven per cent compared with the previous year. The number of offences involving air weapons increased by nine per cent to 3,217, up from 2,954 the previous year, and the biggest rise in any individual weapon category. Last week the Home Office announced that it will review how air weapons are licensed following a request by Suffolk Coroner Dr Peter Dean, who recently concluded an inquest into the death of 13-year-old Benjamin Wragge in May 2016 after he was accidentally shot with an air weapon in the village of Thurston. Policing and Fire Minister Nick Hurd said a review of air weapon legislation was important and timely, adding: We will do so against a backdrop of existing controls that are, by all international comparisons, very robust. I intend to look carefully at the existing controls on air weapons, including how best to ensure that these weapons are stored safely and securely. Although deaths from air weapons are extremely rare, injuries such as that suffered by Mrs Mesder are not. In February, Jordan Walters was jailed for two years after shooting 18-month-old Harry Studley in the head with an airgun to frighten him. The toddler needed emergency surgery and still has a pellet lodged in his brain. He suffers from seizures and has 50 per cent sight in one eye and 25 per cent in the other. Harrys parents, Amy Allen and Edward Studley, have repeatedly called for licences to be introduced, as is now the case in Scotland. The Air Weapons and Licensing (Scotland) Act 2015 makes it a criminal offence to have an air weapon without a licence or permit, punishable by a fine or up to two years in prison. The law, which came into force on January 1 this year, followed a number of high-profile incidents involving legally-held airguns. In 2005, two-year-old Andrew Morton was killed in Glasgow after being shot in the head with an airgun by Mark Bonini, who was subsequently found guilty of murder. During the first six months of the scheme, more than 21,000 weapons were surrendered by owners and around 15,000 people applied for licences. In England and Wales, air rifles and pistols can be purchased by anyone over the age of 18 and legally fired at just 14, and although there are strict restrictions on the power of such weapons, these can be easily overcome. Kits can be purchased online that adapt air weapons with more powerful springs or high-powered gas canisters. These cost as little as £35 and promise to double the power output of a weapon, effectively turning it into an illegal, lethal firearm. One online guide warns potential purchasers: You could lose your face. I am dead serious. Air weapons are frequently used in attacks on pets and other animals. Two horses were left with serious injuries after being shot in the face with air rifles earlier this month while they grazed in a paddock in Stradishall, Suffolk. One was also sho