Young people have shared their experiences of child sexual exploitation (CSE) to create three short performances to raise awareness of the crime and challenge all perceptions from healthy relationships to exploitation. 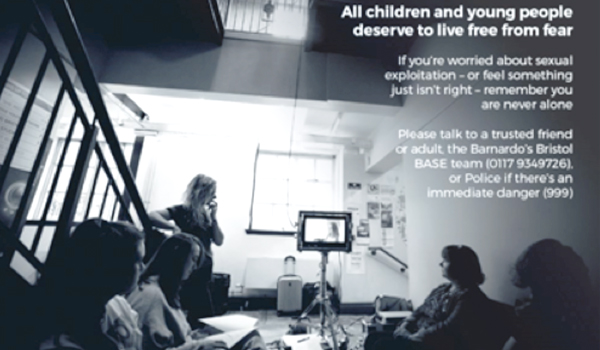 Young people have shared their experiences of child sexual exploitation (CSE) to create three short performances to raise awareness of the crime and challenge all perceptions from healthy relationships to exploitation. Supported by the charity Barnardos, and in partnership with Avon and Somerset police and crime commissioner Sue Mountstevens, the films aim to prevent the same thing happening to other young people. Entitled Free from Fear, the films were premiered in Bristol at the end of last month. The three spoken word performances used poets to deliver the words and expression of the young people as survivors of sexual abuse, through the viewpoint of the older self, giving strength to the younger self (see www.youtube.com/AvonandSomersetPCC). CSE is happening and together, we need to stop it before it starts, said Ms Mountstevens. In order to tackle CSE for good, we need long-term and consistent support to help children to survive and recover from their experiences and importantly to help the police identify and aggressively go after the perpetrators of this atrocious crime. These films not only raise awareness of CSE, but challenge all perceptions from healthy relationships to exploitation. Awareness of CSE is increasing, with high-profile cases involving celebrities gaining media attention. However, these cases focus on the past. The exploitation and abuse of children is happening now and together we need to stop it today. The performances are incredibly inspiring. It is striking how relatable the films are, so much so I believe we can all take something away from watching them. The young people involved in the project explained: Every month, young people across Avon and Somerset are experiencing sexual exploitation. Too often the people who are there to support us dont always recognise the abuse thats taking place or use language which blames us. We want to help other young people and those around them recognise abuse earlier by designing a resource from our perspective, as those who have been through it. Wiltshire PCC Angus Macpherson, who attended the premiere, said: We can never underestimate the damaging effects of child sexual exploitation. Young people need to understand the risks of becoming a victim of CSE, and recognise the signs and behaviour of those seeking to take advantage and cause harm. These films, produced by young people, will enable others to hear first-hand the devastating impact CSE can have on young lives. It will be a key tool in supporting young people who may be at risk and assist support agencies in continuing their fight against CSE. A new CSE service has just gone live in Avon and Somerset as part of a wider West of England initiative, which will be delivered by Barnardos and the areas five local authorities. Barnardos regional assistant director Duncan Stanway said the young people who shared their own experiences in Free from Fear showed how easy it can be for a vulnerable young person to be groomed and abused, and how it can affect anyone, whatever their age and background. CSE remains a hidden crime which is why its so important that we do everything in our power to raise awareness of the warning signs and to reassure victims that they are not to blame, he added. We all have a role to play in keeping children and young people safe from harm.