Thousands of officers who have lost their lives or been killed in the line of duty have been remembered at the 17th annual National Police Memorial Day. 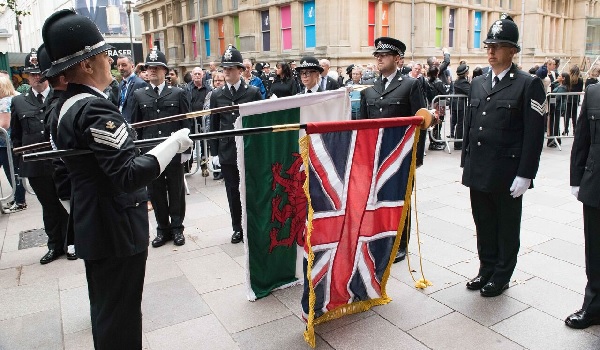 Thousands of officers who have lost their lives or been killed in the line of duty have been remembered at the 17th annual National Police Memorial Day. Families, friends, colleagues, senior officers and government officials were welcomed by a guard of honour as they arrived on Sunday (September 24), formed by representatives from each force in the UK and uniformed officers from overseas. Just before the service started, the National Police Air Service flew over St Davids Hall in Cardiff as a mark of respect. Among those remembered was Police Constable Keith Palmer, who was stabbed to death while apprehending a terrorist at the Houses of Parliament on March 22. A leather-bound book of remembrance provided by the Police Roll of Honour Trust in dedication to officers who have died on duty, was also presented by Sergeant Joanne Matulevicze from Police Scotland. Home Secretary Amber Rudd said: Every day and night, 365 days of the year, police officers keep our communities and country safe. They run towards danger and this could not have been more evident than in the recent terror attacks we have seen across London and in Manchester. It was the attack at Westminster Bridge, which tragically saw PC Palmer pay the ultimate sacrifice. This sacrifice, and the ones which many courageous officers have made, must never be forgotten. I am truly humbled to take part in National Police Memorial Day. Days like today are so important, as they give us the opportunity to pay tribute and to honour those who have lost their lives in the line of duty. Prayers were read by family members and colleagues on behalf of the officers who have lost their lives since the memorial started. And Steve White, Chair of the Police Federation of England and Wales, read all the names of the officers who died in the last year. There was complete silence as petals of remembrance descended from the gallery before the Last Post was played. Mr White said: National Police Memorial Day provides solidarity and solace for many, and it is the police familys commitment to our fallen colleagues. It would not have grown to have the standing it has today without the dedication and tenacity of Inspector Joe Holness QPM and his wife Sharon Holness MBE, both now retired. Joe and Sharon firmly established this day to honour fallen police officers. We are proud to continue their legacy and bring our extended police family together to honour some remarkable friends and colleagues. National Police Chiefs Council chair Sara Thornton said: The National Police Memorial Day is an opportunity for all of us to remember the sacrifices made by those protecting our communities. During these times of continuing risks it is ever more important to recognise the dedication to duty and the courage that our police officers make every day. Our thoughts are with families, friends and colleagues of those who have fallen in the line of duty. Lindsey Briggs, wife of PC Paul Briggs, said: Today has been the first service my family and I have attended. We have met the Home Secretary, the police band were great and it has been a truly lovely day to remember the fallen officers and we really appreciate it PC Briggs, 43, died in January after his wife won a legal battle to end his life support. He suffered a bleed on the brain and five fractures in his spine in a motorcycle crash on his way to work for Merseyside Police, and had been in a minimally conscious state for 18 months. Those remembered include: Detective Constable Joe Mabuto, Thames Valley Police Inspector Mark Estall, Essex Police PC Paul Briggs, Merseyside Police PC Austin Jackson, Leicestershire Constabulary PC Keith Palmer GM, Metropolitan Police PC Gareth Browning, Thames Valley Police.