‘Epidemic of violence’ against police officers condemned by EuroCOP president

The president of the European Confederation of Police (EuroCOP) has condemned the increased “frequency and severity” of violence against police officers across Europe as they enforce escalating Covid-19 restrictions. 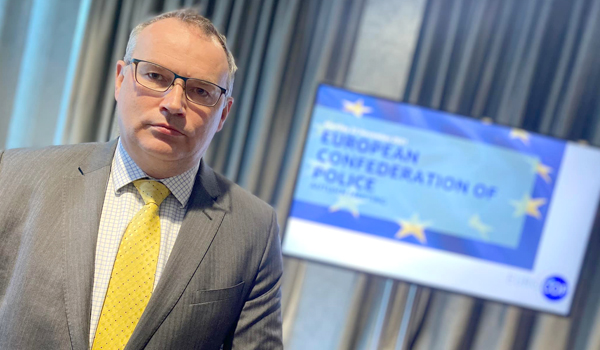 Calum Steele said officers were facing some of the “most serious acts of violence against them in many years”.

At this week’s meeting of EuroCOP in Edinburgh, members unanimously called for a debate by the European Parliament on the “epidemic of violence” against police officers, noting that “the failure to do so to date was shameful”.

Members further endorsed that if a debate is not to take place, then EuroCOP should “consider the option of a formal demonstration against this failure in the future”.

It was agreed that Mr Steele, who is also general secretary of the Scottish Police Federation and secretary of the International Council of Police Representative Associations, will now send a statement to all members of the European Parliament and the Committee on Civil Liberties, Justice and Home Affairs outlining EuroCOP’s concerns.

“It is beyond shameful that the use of weapons against officers in deliberate and sustained attempts to cause severe injury to is now commonplace.

“Legislative changes in many countries have required police officers to work for longer and it is not uncommon to find officers in their sixties, facing violence from much younger and stronger attackers. This increases the risk of serious injury yet further.

“Police officers in all countries have found themselves in the middle of enforcing politically-designed Covid restrictions on the citizens of Europe. This was not something they asked to do but carried out their duty because that is what the overwhelming majority of the citizens of Europe expect them to do.

“Police officers are acutely aware that at times these restrictions have been challenging for us all. They know that they were and are not universally accepted and the protests were inevitable.”

He adds: “Police officers are all too aware that their actions are subject to intense scrutiny. They are all too aware that criticism of what they do, is an inevitable reality. Politicians are all too quick to condemn police actions based on populist agendas yet remain depressingly blind and silent on the violence epidemic being visited on the officers who are simply doing their best to keep the citizens of Europe safe.

“EuroCOP deplores the deliberate silence of those who cannot bring themselves to not only condemn what is inherently wrong, but who also fail to support those doing what is right.

“We have seen debates in the European Parliament condemning the use of force by police officers, and whilst some members used the opportunity to voice support for officers, we have not seen any debate being led, or action orchestrated, on the violence police officers face. This shames us all.

“Now is the time to change that and a parliamentary debate on this issue is no less than police officers deserve.”

EuroCOP represents the interests of 230,000 police officers through 30 police unions and staff organisations across 25 European countries, including the UK, Spain, Greece, Sweden, Norway and Denmark.

The organisation takes on issues such as improving cross-border police cooperation and ensuring all European police officers can do their jobs in the safest way, with the best available protective equipment and best working conditions for them as possible.