A new video has been released as part of an anti-drugs campaign to highlight the link between recreational use and serious violence and intimidation in Northern Irelands communities. 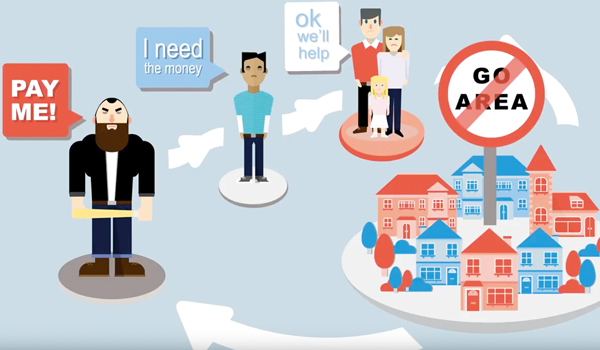 A new video has been released as part of an anti-drugs campaign to highlight the link between recreational use and serious violence and intimidation in Northern Irelands communities. Police Service of Northern Ireland (PSNI) Inspector Jonny Francey said he hopes that by introducing the Think Before You Buy initiative, people buying drugs on a casual basis will realise they are contributing to the violence and intimidation that is striking fear through the heart of communities. We want people to consider when they hand over their money to a drug dealer, where that money goes and what its used for; that its not being invested for the good of the community, he said. Instead, its going to merciless organised crime gangs who peddle their ill-gotten gains with no regard for society. For example, money from a casual transaction at the weekend could be used towards buying a gun used in a paramilitary-style attack against someone who has a drug debt, or a getaway car used in a crime. Someone with a drugs debt may carry out a burglary or a robbery in a bid to get the money they need to pay a debt to the very same dealers the casual user is handing their money to. The casual drugs transaction at the weekend has long-lasting consequences for society and we want people to start having that conversation, to Think before you Buy. The campaign is a joint initiative between the PSNI, An Garda Síochána and the Safer Blanchardstown local community policing forum following its introduction in the Republic of Ireland last month. It uses posters and a short video to raise awareness that people who engage in casual drugs use also contribute to the fear and intimidation inflicted on people, particularly drug debt intimidation. Insp Francey said the campaign caught his attention when he was on secondment in Dublin last year and came across the Safer Blanchardstown forum, which was working in the Local Drug and Alcohol Task Force area to help improve confidence and relevant information exchange between communities. I thought it was something the PSNI could adopt in Northern Ireland. I hope by introducing the initiative people buying drugs at the weekend, on a casual basis, will realise they are contributing to the violence and intimidation that is striking fear through the heart of our communities, he said. It is hoped the hard-hitting images and commentary will change the attitudes of recreational drugs users by helping them realise how their habits fuel not just the drugs trade, but also the serious organised crime and harm it brings to communities throughout Northern Ireland. The PSNIs head of the Criminal Investigation Branch, Detective Chief Superintendent Tim Mairs, said: Drugs bring misery to users, their families and communities, and the PSNI is committed to tackling this blight in our society. I am delighted to launch Think Before You Buy as this type of initiative links in with our approach of reducing the harm caused by illegal drugs, which organised criminals bring to our communities. He added: I would like to commend Inspector Jonny Francey who had the excellent idea to adopt and adapt this campaign for our communities in Northern Ireland following a secondment to An Garda Síochána last year. It is crucial that we continue to work with partners, both within Northern Ireland and the Republic of Ireland, in order to stop the misery that the illegal supply of drugs brings. We all face the same problems in relation to the damage caused to communities and the Think Before You Buy initiative will help to make people aware that casual drug use also feeds into the coffers of the organised criminal gangs that supply illegal drugs. Safer Blanchardstown coordinator Philip Jennings explained: The drugs market is made up essentially of two distinct end user groups  regular users and what are referred to as casual, occasional or recreational drug users. Regular users are those people who use drugs every day and would be a dependable, steady source of income for