Drones offer opportunity for a digital wall at the border 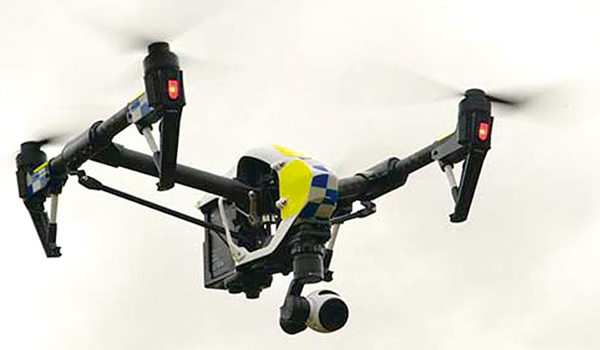 They are deployed at the Italy/France border to identify migrants crossing into France, as well as thermal imaging camera drones on the French side of the Channel Tunnel to track potential asylum seekers crossing into the UK, he said.

In the US, sensor technology with facial recognition capabilities has been added to drones, which allow the cross-referencing of identified persons with law enforcement databases; this data can then provide information to Customs and Border Protection, including potential threats.

With a rising security threat and the challenges in the control of immigration, there continues to be a necessary hunger to understand new innovations, tools and technologies, said Mr Smith.

Drone technology should be a priority in this debate, with drones providing the Border Force with a so-called digital wall, enabling a safer and foolproof alternative to the harder border, which presents a target to breach.

He said there are a plethora of robotics companies offering cutting-edge technical features, with platforms with the capacity to visualise complex three-dimensional physical environment data in real-time on smart devices from anywhere in the world.

A drone, or an unmanned aerial vehicle, can either be controlled by ground pilots or autonomously by a pre-programmed mission.

It is a genuine technology innovation that can benefit both the private and public sector, explained Mr Smith in his latest public services blog for Accenture.

Drones can carry sensors to perform dedicated functions capturing large amounts of data quickly, making them appealing cross-industry. They allow for staff to be utilised elsewhere, are more time-efficient, cheaper and can access places deemed too unsafe and high-risk for persons.

And its happening today. Devon and Cornwall Police  which launched the first operational policing drone unit with Dorset Police in July, with six drones operating across both forces  has zoom-function thermal imagery drones to help search for missing persons and for photographing crime scenes.

Mr Smith said Swedish medical services, for example, were currently testing the defibrillator drone that can beat an ambulance in arrival time to help people suffering from cardiac arrest.

The US military has launched 103 miniature swarming autonomous surveillance Perdix drones able to dodge air defence systems and share a distributed brain, from a fighter jet during a test in California, he added.

[And] Chinas military has released new deep-sea drones to detect submarines while Singapores Maritime and Port Authority has released the Water Spider from its patrol boats when responding to marine emergencies.

With it being a new and revolutionary technology, there are of course several concerns and issues  from hack-to-hijack to drone regulation, from safety protocols to ethical standards and privacy  that industry and governments need to address. However, as the earlier examples demonstrate, progress is being made and real change felt in agencies around the world and now is the time to consider the opportunity further in the UK too.