The UK`s most senior prosecutor today condemned inaccurate media coverage that can hinder rather than inform the Crown Prosecution Services (CPS) approach to rape cases. 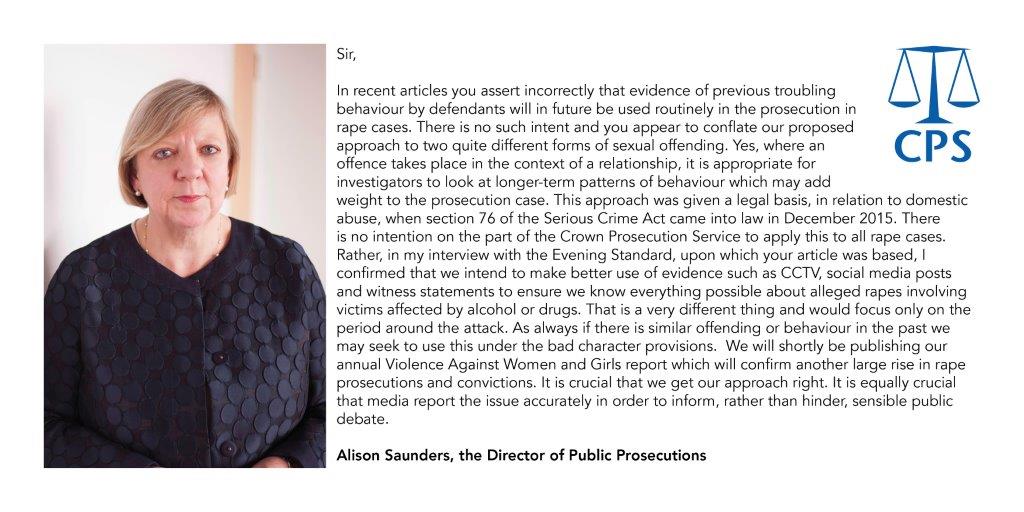 The UK`s most senior prosecutor today condemned inaccurate media coverage that can hinder rather than inform the Crown Prosecution Services (CPS) approach to rape cases. Director of Public Prosecutions (DPP) Alison Saunders strong refuted The Telegraph and Daily Mails false assertions that evidence of previous troubling behaviour by defendants will in future be used routinely in the prosecution of such cases. Stressing that prosecutions and convictions have significantly increased, Ms Saunders explained in a letter published on Monday (August 14) that articles in both newspapers appear to conflate our proposed approach to two quite different forms of sexual offending. The papers reported that jurors in rape trials will be told more about the previous sexual behaviour of male defendants in a bid to increase the chances of conviction and suggested Ms Saunders had told prosecutors to focus on the behaviour of men leading up to alleged rapes, rather than just the incident itself. The move, the papers intimated, was intended to provide juries with a fuller picture of male suspect`s character, after a series of high profile rape trials ended in acquittals. The papers said prosecutors would be asked to focus on a male suspect`s previous conduct in other relationships in order to find any relevant evidence. The DPP said: Yes, where an offence takes place in the context of a relationship, it is appropriate for investigators to look at longer-term patterns of behaviour which may add weight to the prosecution case. This approach was given a legal basis in relation to domestic abuse when section 76 of the Serious Crime Act came into force in December 2015. But she said there is no intention on the part of the CPS to apply this to all rape cases, adding that instead it intended to make better use of evidence such as CCTV, social media posts and witness statements to ensure we know everything possible about alleged rapes involving victims affected by alcohol or drugs. Ms Saunders added: That is a very different thing and would focus only on the period around the attack. As always, if there is similar offending or behaviour in the past we may seek to use this under the bad character provisions. The CPS` latest annual report shows that offences involving alleged violence against women and girls account for almost a fifth of its overall caseload. Around 23,000 rape cases are reported to UK forces each year but less than 3,000 end up in a conviction. A forthcoming annual Violence Against Women and Girls report will confirm another large rise` in rape prosecutions and convictions, Ms Saunders said today. It is crucial that we get our approach right. It is equally crucial that media report the issue accurately in order to inform, rather than hinder, sensible public debate, she concluded in the letter.