Devon and Cornwall Police has become the first force in the UK to employ Digital Storage Detection Police Dogs in a historic step for policing. 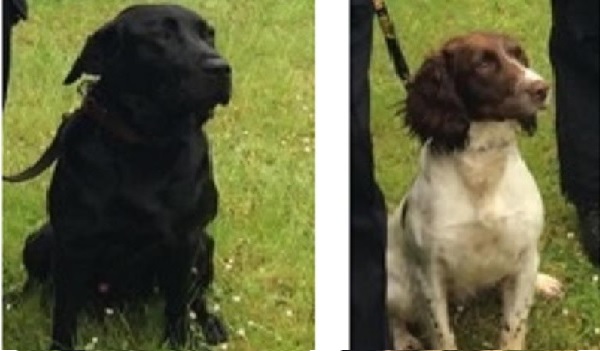 Devon and Cornwall Police has become the first force in the UK to employ Digital Storage Detection Police Dogs in a historic step for policing. Trained by the force, Tweed, a 19-month-old Springer Spaniel, and 20-month-old Labrador Rob, are the first of their kind in the UK. The dogs are taught to sniff out hidden hard drives and other electronic storage devices that could contain digital evidence such as child abuse images or terrorism material. They have been used in more than 50 warrants across the UK, including in Hampshire, South Wales and North Yorkshire. On one occasion, Tweed indicated something may have been within what looked like a can of Coca-Cola. Further inspections revealed that it was a money box that had several SD cards hidden inside. Essex Police used Tweed during a successful warrant on September 13, discovering a number of child abuse images on hidden hard drives. Police Constable Jan Simpson said the force was grateful to Devon and Cornwall Police for allowing Tweed to provide invaluable support. Chief Superintendent Jim Nye, commander of Dorset Police and Devon and Cornwall Polices Alliance Operations Department, said: This is a historic step for the alliance and policing in the UK. These dogs will give the police a new way to fight the threat of terrorism, paedophiles and fraudsters. Tweed and Rob have been used by police at crime scenes and executions of warrants, not just within Devon, Cornwall and Dorset, but across the whole of the UK. The dogs have been used to sniff out data devices such as mobile devices, USB sticks, SD cards, hard drives and computers. Once again, we have shown that we are prepared to look at new technology and will always strive to get one step ahead to tackle criminality. PC Graham Attwood, a police dog instructor from Devon and Cornwall Police, began to research training dogs in digital storage detection in May 2015, when he realised the Connecticut State Police Dog unit was the first in the world to do it. Following his collaboration with the US police department, a pilot scheme was launched in December 2016. PC Attwood said himself and members of the alliances dog school initially handled and trained Rob and Tweed in their own time. He added: The majority of the dogs we have in the force either come from our puppy breeding scheme or are gift or rescue dogs, but this was a unique challenge for us as we identified and purchased Tweed and Rob last December when they were around 15 months old, and embarked on this journey with them. Recently retired Connecticut State Police Dog Instructor and co-founder of the digital storage detection programme, Mike Real, along with the only digital detection dog handler in the FBI, Special Agent Jeffrey Calandra, were invited to Devon for a week in March 2016 to train Tweed and Rob. The dogs operational search abilities were assessed over a three-day period, and they passed with flying colours. Following the assessment, Mike Real said: Constable Attwood and the trainers at the Devon and Cornwall Police Canine Unit have done a masterful job of bringing this new disciple of police canine to the UK. These dogs have already proved their ability and their worth in the US in locating evidence in numerous important cases. I have every confidence that Tweed and Rob will provide the UK law enforcement community an impressive new tool in the fight against child predators, fraud and terrorism. Devon and Cornwall Police will assess the success of Rob and Tweed at the end of 2017 with a view to roll the programme out further. Northumbria police and crime commissioner Vera Baird, said: We have a highly skilled and trained dogs section at Northumbria Police and Im sure the introduction of cyber dogs elsewhere will be watched closely with great interest. I think dogs can play a fantastic part in catching all sorts of offenders and exploring new ways that can help put those responsible for appalling crimes behind bars gets my backing.