Investigators could find valuable biometrics when blood-sucking insects are present at a crime scene, according to recent research by Nagoya University. 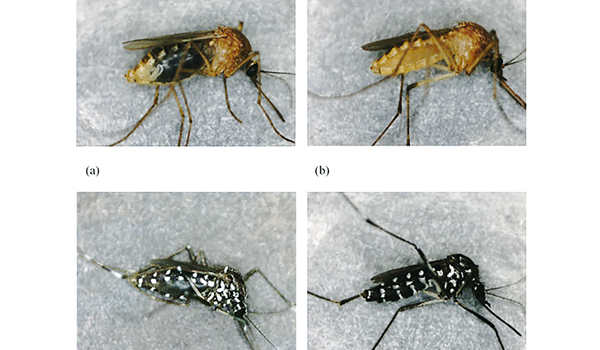 New research from Japan shows that human blood extracted from mosquitos remains viable for DNA analysis for up to two days after feeding  opening up yet another avenue for forensic scientists to link suspects to crime scenes. In the future, it might even provide evidence that can be used to help obtain a conviction. Mosquitoes occur almost worldwide, and females of some species feed on blood from humans and other animals to support ovum maturation. And in warm and hot seasons, fed mosquitoes are often observed at crime scenes. As a mosquito can easily consume its own bodyweight in blood, those fully fed are able to fly only short distances while digestion takes place. This latest study conducted by researchers at Nagoya University attempted to estimate the time that had elapsed since feeding from the degree of human DNA digestion in mosquito blood meals, and also to identify the individual human sources of the DNA using genotyping in two species of mosquito. For the study, published in the online science journal PLoS, seven volunteers in their forties and fifties agreed to be bitten by the common house mosquito and the Asian tiger mosquito. Two to four microlitres of blood from the mosquitoes were then analysed every few hours using polymerase chain reaction (PCR) techniques. PCR, is a standard tool in forensics for amplifying a minute amount of DNA. A single DNA fragment can be multiplied many thousands or even millions of times. The team then used the amplified samples to find out how much DNA was left after the mosquitoes had fed and who it belonged to. By examining DNA in blood digested by two different species of mosquito over a range of times after feeding, the team was able to trace back blood samples to individual volunteers, even after two days of digesting in the mosquito. After roughly three days the mosquitoes completely digested the blood. Research lead Toshimichi Yamamoto explained: Ours is the first study to systematically apply modern DNA profiling techniques to the challenging forensic analysis of a mosquito blood meal. We hope this will help crime scene investigators collect reliable evidence that could be used to guide investigations and support convictions. Although we need to take some steps to improve our methods and obtain more data, with more accurate quantification methods, we might be able to estimate the time after mosquitoes` blood feeding with even greater accuracy. The work follows a 2015 study conducted by scientists at the Universidade Federal de Pernambuco in Brazil in which researchers collected mosquitos from two homes, as well as saliva samples from the people who lived there. From 26 female mosquitos, the scientists were able to collect DNA profiles of 11 people that correlated with the saliva samples. The evidence obtained from the study was strong enough for the scientists to urge investigators to collect these insects indoors where crimes were committed, because it may be possible to find intact genetic profiles of suspects for later comparison to identify an offender and/or exclude suspects. Most mosquitoes rarely travel beyond a radius of a few hundred metres and, depending on the species, have a lifespan ranging from a few days to a few months, although the females tend to live longer than the males. This means that, especially in the case of closed crime scenes such as the inside of a house or vehicle, insects may have had the opportunity to bite suspects while the crime was being committed. A mosquito has already helped to solve at least one murder case. When the body of a woman was found partially covered by sand on a beach in Sicily, investigators suspected a prominent businessman, whose car had been seen in the area the night she had died. A search of the suspects home produced no substantial evidence, but forensic technicians did identify a bloodstain from a mosquito that had been squashed against a wall. Technicians recovered the blood sample  and also the remains of the insect for species identification  a