Finsbury Park terror attacker Darren Osborne has been jailed for life  with a minimum term of 43 years. 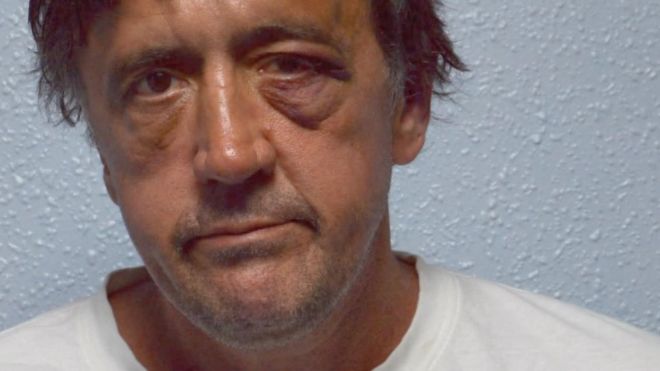 Finsbury Park terror attacker Darren Osborne has been jailed for life  with a minimum term of 43 years. A jury had found him guilty of murder and attempted murder at the end of a nine-day trial, dismissing the defendants absurd claim that another man had ploughed a hire van into Muslims in north London and vanished. Justice Cheema-Grubb explained Osborne had not been charged with a terror offence because it was unnecessary to use the specific laws in murder cases, but the case was prosecuted as an act of terrorism. Osborne, who stood with his hands crossed in front of him as sentence was passed, gave no reaction as Mrs Justice Cheema-Grubb told him: This was a terrorist attack. You intended to kill. She said he had been rapidly radicalised, adding: Your mindset became one of malevolent hatred. In short you allowed your mind to be poisoned by those who claimed to be leaders. Woolwich Crown Court had heard how Makram Ali, a 51-year-old grandfather, had collapsed just two minutes before the atrocity shortly after midnight on June 19. A crowd of Muslim worshippers attending Ramadan prayers, several of them wearing traditional clothing, gathered around him to help and became an unwitting target for Osborne as he looped around Finsbury Park in search of a target. Survivors described how they chased the 48-year-old down after he crashed the van and stumbled out of the drivers seat. He fought against those trying to pin him to the ground, then smiled and said: Ive done my job, you can kill me now. Witnesses gave the court harrowing accounts of seeing Mr Alis body on the ground and nine other victims scattered around him, including one man trapped under the van who was left with life-changing injuries. A note found in the vehicle  scribbled down in a pub the night before  showed Osborne raging against Muslims, grooming gangs, Jeremy Corbyn, Sadiq Khan and Lily Allen. He denied charges of murder and attempted murder but submitted no statement in his defence until Friday (January 26)  after hearing five days of evidence proving his guilt. Part way through the trial, Osbornes new story claimed that he mounted the original plan to cause as much damage as possible at a pro-Palestinian march in London with two men he met in a Welsh pub. He told the court that alongside supposed co-conspirators Dave and Terry Jones, he hoped to found a Welsh far-right group called the Taffia. Osborne told the court he had wanted to kill senior Labour figures including leader Jeremy Corbyn and London Mayor Sadiq Khan. He had also plotted to murder Rochdale Labour councillor Aftab Hussain, who he said had backed a member of the grooming gangs, but called it off because he wanted `more casualties`. The attacker admitted he had initially hoped to plough through as many people as possible at the pro-Palestinian Al Quds march in central London, previously attended by Mr Corbyn. But after driving a hire van from Cardiff to London on June 18, road closures thwarted Osborne`s plan. Instead, he travelled across London in hunt of a mosque, eventually ending up in Finsbury Park in Mr Corbyn`s constituency at around midnight. In his mind, the defendant had cast all Muslims as criminals and decided to take matters into his own hands and punish them, prosecutor Jonathan Rees QC said, saying the atrocity was inspired by a hatred of all Muslims that had its roots in the material Osborne had watched on television and viewed online. Osbornes partner, Sarah Andrews, told the court he was being treated for depression and had considered suicide in the weeks leading up to the attacks. She said he had become brainwashed after watching BBC drama Three Girls on grooming gangs in Rochdale and reading social media posts by far-right leaders including Tommy Robinson and Jayda Fransen. The Metropolitan Police Service believes Osborne was radicalised in under a month, sparking calls for internet companies and the security services to combat extremist material even if it does