An investigation led by the FBI and the US Drug Enforcement Agency, supported by Europol, has taken down two markets on the dark web responsible for the trading of more than 350,000 illicit commodities. 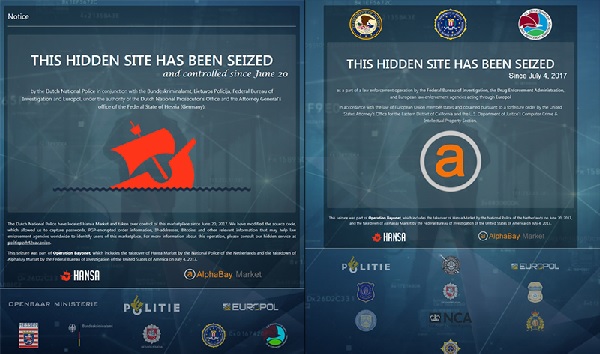 An investigation led by the FBI and the US Drug Enforcement Agency, supported by Europol, has taken down two markets on the dark web responsible for the trading of more than 350,000 illicit commodities. The AlphaBay and Hansa platforms, taken down on Thursday (July 20), have been associated with trading drugs, firearms and cybercrime malware. According to Europol, AlphaBay was the largest criminal marketplace on the dark web with more than 200,000 users and 40,000 vendors. It contained more than 250,000 listings for illegal drugs and toxic chemicals, and produced an estimated $1 billion of transactions since its creation in 2014. The alleged creator and administrator of AlphaBay, a 25-year-old Canadian, was arrested in Thailand on July 5. He was later found dead in a Bangkok jail after apparently taking his own life, according to the US Department of Justice. When AlphaBay went offline earlier in July, users of the site searched the dark web for alternative marketplaces, many turning to Hansa. We recorded an eight times increase in the number of human users on Hansa immediately following the takedown of AlphaBay, Europol executive director Rob Wainwright said. The investigation into Hansa began in 2016, and it was seized and covertly monitored for a month by Dutch national police after two administrators in Germany were arrested, before it was deactivated. Europol says this is likely to lead to hundreds of new investigations across Europe, as some 10,000 foreign addresses of Hansa market buyers were passed onto Europol. Acting FBI Director and Deputy Director of the US Drug Enforcement Administration (DEA), said: “The capability of drug traffickers and other serious criminals around the world has taken a serious hit today after a highly sophisticated joint action in multiple countries. By acting together on a global basis the law enforcement community has sent a clear message that we have the means to identify criminality and strike back, even in areas of the dark web. There are more of these operations to come. Dimitris Avramopoulos, European Commissioner for Migration, Home Affairs and Citizenship, added: “The dark web is growing into a haven of rampant criminality. This is a threat to our societies and our economies that we can only face together, on a global scale. The take-down of the two largest criminal dark web markets in the world by European and American law enforcement authorities shows the important and necessary result of international cooperation to fight this criminality. I congratulate the American and Dutch authorities for their successful work, as well as Europol for centrally supporting this endeavour. Our fight against criminal activities online and offline will continue and intensify.”