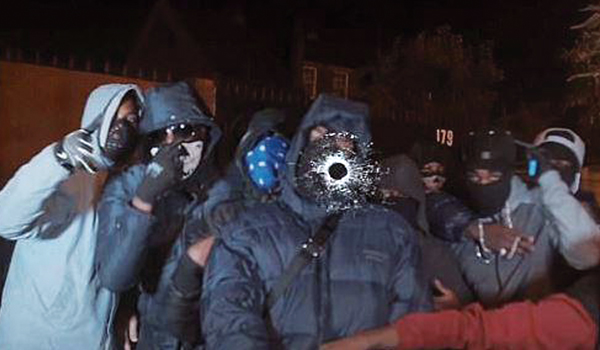 During the many brutal battles between the Plains Indians of North America and settlers of what would later became the US, warriors would often display their bravery through an act known as counting coup  touching an enemy with a hand or getting close enough to steal their weapons or horses, then escaping unharmed. The greater the risk of death, the greater the prestige. Today, in inner cities across the country, youth gangs are using social media to perform their own modern-day version of counting coup, filming themselves in the territory of rivals, issuing threats, carrying out vicious attacks and stealing possessions. The videos are then uploaded to platforms such as YouTube and often viewed hundreds of thousands of times, stirring up resentment and anger, which often boils over into further acts of violence. Earlier this month at the Central Criminal Court, two youths were found guilty of the murder of Dean Pascal-Modeste  also known as Floss  an innocent victim of a long-running dispute between the B Side gang and its rivals, the Splash gang, in the Grove Park area of southeast London. Both gangs had featured in YouTube rap recording sessions with former Radio 1 DJ Tim Westwood, and had traded insults in online videos. B Side lyrics included the provocative words dip [stab] Splash till the Splash is done and described their rivals as jokers and d***heads, Splash bragged in turn about being the kings of Lewi (Lewisham) and posted a music session on YouTube in which a girl was disparagingly described as a B Side paigon ho  meaning lying prostitute. The feud appeared to be over bragging rights and control of the Lewisham area. Antagonism between the two gangs came to a head when a young woman was stabbed after she appeared to switch allegiance. Her attacker was later jailed for 22 years for attempted murder. The attack on Mr Pascal-Modeste took place on February 24 this year, as he and two friends with links to the Splash gang were on their way to a recording session. They were ambushed by several young men on mopeds, including one brandishing a gun, and another group of around six youths who were on foot. Mr Pascal-Modeste tried to flee but the attackers singled him out and pursued him, like a pack of wolves in the words of one witness. He was surrounded and stabbed 14 times. He suffered a punctured lung and died at the scene. Many of the passers-by who witnessed the attack had been collecting their children from a nearby school. Threats of violence in YouTube videos were also highlighted after the murder of CJ Davis, a 14-year-old boy killed with a shotgun as part of a feud between drug gangs in Newham, East London. Speaking to the Home Affairs Select Committee earlier this month, Metropolitan Police Service (MPS) Commissioner Cressida Dick acknowledged that there had been numerous cases in which violence had been preceded by such videos and that her officers were doing their best to prevent such material being seen. I dont want it to be the case that after a murder, or after a very serious crime, my people are looking at social media and discovering fantastic evidence that shows what was likely to happen, she said. I want to have, both within my service and indeed in the companies, a much more proactive approach about what is on social media, to take down the stuff that is encouraging people to do crazy things and, secondly, to alert us to signs that things are going wrong, for example, between two gangs. Her comments echoed the thoughts of Temporary Commander Jim Stokley, head of the MPSs Gangs and Organised Crime Command, who last month called on YouTube and other social media sites to do more to take down rap videos stoking violence. Of course, its difficult  we might be able to close it down on one forum, but they will show up on another, but I would rather have them closed down than have them as a source of intelligence, he said. I would encourage those companies to shut those videos down. Mr Stokley added that, where possible, an