A man with a history of attacking the police blasted an officer with a loaded crossbow before setting his flat on fire during an armed siege at his home. 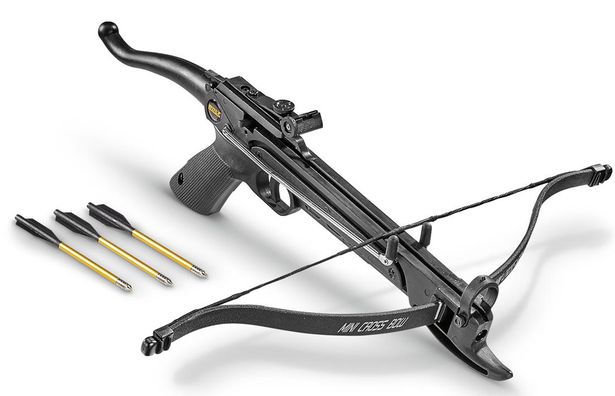 A man with a history of attacking the police blasted an officer with a loaded crossbow before setting his flat on fire during an armed siege at his home. Christopher Hutchison, who had hurled heaters and a chest of drawers at Police Scotland officers in a previous incident, was warned he faces a significant prison sentence for his latest outrage. Hutchison shot Sergeant Stuart Morrison in the arm with the crossbow bolt  firing from the window of his house during chaotic scenes in Blantyre, South Lanarkshire on October 24 last year. He only stopped when he ran out of bolts, the High Court in Glasgow was told on Monday (February 5). Armed officers were called to the property after the 37-year-old was seen with the potentially deadly weapon. The court heard that Hutchison was in self-destruct mode following the death of his cancer-stricken father 48 hours earlier. His house was near two different schools leading to the area being made secure as firearms officers were alerted. Prosecutor Sean Smith QC said the weapon was described as powerful and capable of causing serious injury. Mr Smith said: Firing bolts from the crossbow carried clear disregard for the safety of others. Sgt Morrison was one of the armed officers outside the property. He was 30 feet away when Hutchison discharged the crossbow with a bolt going through a closed door and striking the officer. Luckily it only broke the skin on the officer`s arm, Mr Smith said. A police negotiator was then called to try and calm Hutchison. His girlfriend was also in the house at the time. But Hutchison continued to fire the crossbow out of a window onto the street. At one point he shouted that the bolts were a warning to officers. He eventually dropped the weapon but only after claiming he had run out of bolts. Hutchison then yelled his neighbours better be out as he had petrol and was going to set fire to his house. He went on to torch curtains in the lounge as well as an upturned bed in a room. The court heard the blaze spread rapidly with the property badly damaged. Both Hutchison and his partner were eventually removed from the house. Euan Dow, defending, said Hutchison`s father had died two days before the crimes. The advocate added Hutchison had a very demanding role as his fathers carer and appeared to suffer a bereavement breakdown that day. Mr Dow told the court: In the morning in question, he was in self-destruct mode. It is clear  taking him at his word  that he did not care if he lived or died himself and appeared hellbent in provoking the firearms officers. The court heard Hutchison, who admitted charges of assault, culpable and reckless as well as wilful fire-raising, now wanted to express his apologies for striking Sgt Morrison. It emerged Hutchison already had a lengthy criminal past with a recent jail term for throwing items  including heaters and a chest of drawers  at officers. Judge Lady Rae, who told Hutchison to expect a significant prison term, said: These are very serious offences. A number of people  including yourself  are fortunate that you are not on more serious charges. While I appreciate there may have been bereavement issues, many people have them, but do not react the way you did. He was remanded him in custody with sentencing deferred for reports.