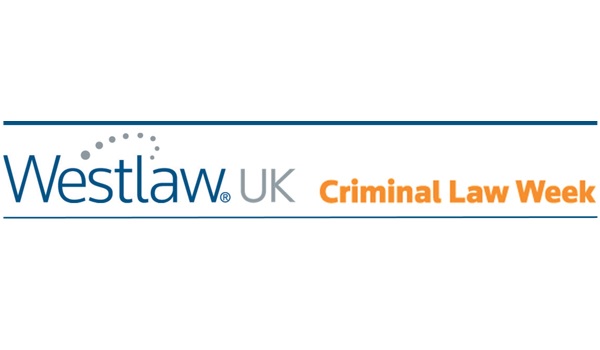 Westlaw provides coverage of case decisions, including those from the High Court, Courts of Appeal and the Supreme Court, with analytical digests written by a team of legally qualified editors. The Westlaw case analysis page provides everything you need to know about a case in one place, including law report citations, a case digest, case status, graphical history, and links to the full text transcript, relevant cases, legislation, books and journal articles. The following Westlaw content has been selected for Police Professional by the editors of Criminal Law Week. Commentary is provided by experts from the Criminal Law Week Commentary Board. To subscribe to Criminal Law Week, please visit www.criminal-law.co.uk or call 0207 542 9797. R (on the application of R) v National Police Chiefs Council Divisional Court. October 17, 2017. [2017] EWHC 2586 (Admin), (CLW/17/46/24). Summary: The Rehabilitation of Offenders Act 1974 (Exceptions) Order 1975 was unlawful under European Convention on Human Rights (ECHR) Art.8 to the extent that it applied to low-level historical reprimands, such as a reprimand issued to a 13-year-old for theft, and required self-disclosure of such reprimands when applying for certain roles. In 2007, when the claimant was 13, she and others stole a £20 sarong from a shop. She received a reprimand for theft. She was otherwise of good character. In 2015 she applied for the support officer role. When asked to disclose any prior misconduct, she disclosed the reprimand. Her application was rejected, solely on that basis, in accordance with the police forces policy, which created a presumption against employing anyone with a conviction or caution for theft absent exceptionally compelling circumstances. The police had confirmed the reprimands existence in the Police National Computer (PNC). She was later diagnosed with depression. The claimant argued that the use of the reprimand in the decision, and its disclosure under the Rehabilitation of Offenders Act 1974 (Exceptions) Order 1975, amounted to an unjustified interference with her private life under ECHR Art.8. Held: Judgment accordingly. Legislative scheme  under the Rehabilitation of Offenders Act 1974 Sch.2, protection was given against the need for self-disclosure of reprimands, but the 1975 Order excluded that for certain employments, including police support roles. However, those roles had been removed as exceptions by the Rehabilitation of Offenders Act 1974 (Exceptions) Order 1975 (Amendment) (England and Wales) Order 2013. The claimant had not been obliged to disclose her reprimand (see paras 36-42 of judgment). Unlawful use  the decision was unlawful as it had applied the 1975 Order and policy to a post-2013 situation. No request for information should have been made. The police should not have used the information provided as part of their assessment. They had taken account of wholly irrelevant considerations. The policy was a virtually insurmountable hurdle. The discretion was more illusory than real. It contained no meaningful consideration of relevant Art.8 factors. There were no safeguards, appeal or review structure. The mere existence of a right of judicial review was not the sort of safeguard contemplated. The policy and its application to the facts were not in accordance with the law under Art.8 (paras 71-73, 77-80). Unjustified interference caused by use  the interference with the claimants art.8 rights was not necessary in a democratic society, R (on the application of T) v Chief Constable of Greater Manchester [2014] UKSC 35, [2015] AC 49 followed. Its objectives of protecting the integrity of criminal investigations, preserving public trust in the police, and rehabilitating offenders did not justify the severe interference with the claimants rights. Her career path had been blocked and she had suffered clinical depression. There was no connection between the reprimand and a risk to the first two objectives, and there was actual tangible harm to the objective of rehabilitatio