A Crown Prosecution Service (CPS) review of completed prosecutions under coronavirus laws last month has found the legislation was correctly applied in almost 85 per cent of cases.

Out of 93 prosecutions finalised under the Coronavirus Act and Health Protection Regulations in May, 76 were charged correctly. All but one of the 17 “erroneous prosecutions” was stopped at the first court appearance, said the CPS.

Gregor McGill, CPS director of legal services, said: “Continued hard work by the police and CPS has improved the application and enforcement of the rules under the coronavirus legislation.

“Errors have significantly reduced, with all but one of the incorrect charges immediately identified and withdrawn by prosecutors in court.

“The CPS will continue to review all finalised prosecutions where no fixed penalty notice was offered, as well as every case where someone disputes they have breached the regulations, for as long as these laws remain in place.” 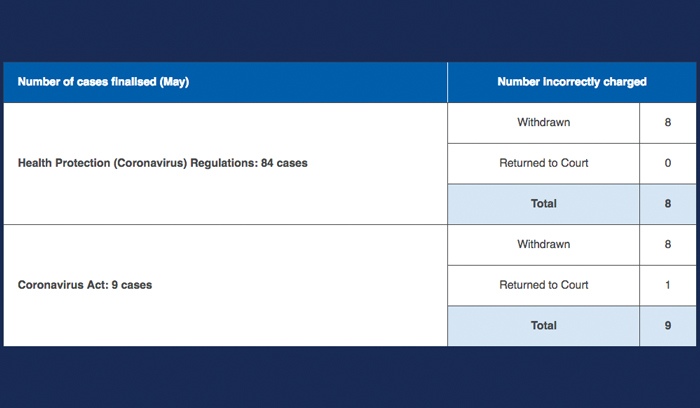 Of 84 prosecutions brought under the Health Protection Regulations, 76 were found to be correct. Prosecutors withdrew the remaining eight charges in court – four of which related to homeless people, two because Welsh regulations had been used in England and two on evidential grounds.

All nine prosecutions under the Coronavirus Act were discontinued because there was no evidence they applied to potentially infectious people, which is what this law covers.

Eight cases were withdrawn in court, with Regulations charges imposed for two offences. One conviction was returned to be relisted and set aside.

All but one Act case was charged alongside substantive offences, including burglary and assaulting an emergency worker.

Last month’s review of 231 finalised coronavirus prosecutions identified 12 mistakes under the Regulations and 44 under the Act.

Of the 93 cases reviewed in May, 85 were charged by the police and eight by the CPS.