A police officer has been jailed for a year after “latching on to a man`s lip” during a row about queue jumping at a bar. 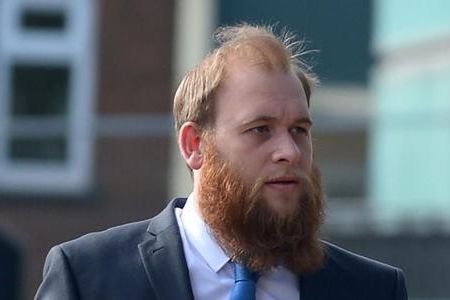 A police officer has been jailed for a year after “latching on to a man`s lip” during a row about queue jumping at a bar. Detective Constable Stephen Smith, 33, flew into a rage as he waited to get into a packed bar to watch a televised Six Nations rugby match between England and Wales. The off-duty Gwent Police officer was outside Brewhouse in Cardiff city centre when an argument was sparked between him and Jonathan Harris on March 12 last year. CCTV footage captured the moment Det Con Smith grabbed Mr Harris by the neck and pulled him towards his face and bit him. The officer can then be seen swinging his arm at Mr Harris before walking away with then-girlfriend Hannah Morgan. A court heard medics said Mr Harris suffered injuries “caused by a human bite to the lower lip. Det Con Smith, who claimed Mr Harris was being aggressive and looked like he was going to throw a punch at his girlfriend, was found to have no bite marks on his face. A jury at Cardiff Crown Court found him guilty of unlawful wounding after a four day trial. But they cleared Det Con Smith of wounding with intent and perverting the course of justice after it had been claimed the officer hacked his victims Facebook account in a bid to clear his name. He denied all the charges. The court heard the two men clashed with foreheads touching and the officer said he used his incisor to bite (Harris) to make him let go after the claimant bit first in the encounter. Det Con Smith told investigating officers: I had to do it to get him off. There was no other way as he was latched on to it (the lip). I just wanted to get away from him. It was literally over in like seconds. The officer also said he was around a six or seven out of ten on a scale of intoxication and was trying to diffuse the situation and control Harris. But when questioned, Mr Harris said: “I would never even think of biting someone. “It`s an absolutely disgusting thing to do. It`s like spitting in someone`s face”. Jailing him for 12 months at Merthyr Crown Court, Judge Richard Twomlow told him: “This was a serious incident.” A Crown Prosecution Service spokesperson said: “Police officers are expected to protect the public and uphold justice regardless of the situations they find themselves in. “However, in this instance Smith reacted in a way that led him to be arrested himself. “The Crown Prosecution Service will apply the law with equal weight to anyone investigated regardless of their standing within the community.” Gwent Police`s Detective Superintendent Ruth Price said: “Following the verdict of Detective Constable Stephen Smith an internal review will now be held. At this stage it would be inappropriate to comment further until its conclusion.”