A team of researchers from UK and US universities have devised a novel way to improve eyewitness identification in police line-ups – including people who do not look the same as the suspect. 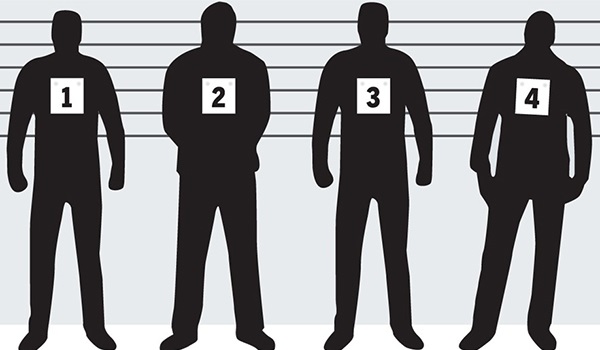 In a paper published by the Proceedings of the National Academy of Sciences, researchers – from the University of Birmingham and University of California San Diego and Duke University in the US have shown for the first time that selecting ‘filler’ subjects who match a basic description of the suspect but whose faces are less similar, rather than more, leads to better outcomes than traditional approaches in the field.

Adopting such a counter-intuitive technique was found to improve eyewitness performance by about ten per cent.

“In practice, police tend to err on the side of picking facially similar fillers for their line-ups,” said John Wixted, the paper’s senior author and a professor in the University of California San Diego Department of Psychology. “What our study shows is that it is, contrary to intuition, actually better to pick fillers who are facially dissimilar. Doing it this way continues to protect the innocent to the same degree while helping witnesses to correctly identify the guilty more frequently.”

In a study of 19,732 participants, the researchers played a mock crime video depicting a white male stealing an office laptop and then provided photographs of one suspect (either the perpetrator or an innocent suspect) plus five police line-up fillers. The fillers always matched the most basic description of the perpetrator but they varied in how much they facially resembled him. Facial similarity among photos was scored by an additional set of participants on a scale of one to seven, with seven being most similar.

The researchers found that picking fillers who were facially dissimilar enhanced the ability of eyewitnesses to accurately pick out the perpetrator when he was in the line-up, without increasing the likelihood of wrongly identifying an innocent suspect when the real perpetrator was not in the line-up.

In a typical police line-up, one photo of the suspect is displayed, plus photos of five or more fillers who are known to be innocent. To create a fair line-up in which the suspect does not stand out, fillers are selected if they are similar in basic appearance to the suspect (height, weight, race, hair color and length, etc), or if they have facial features included in a witness’s description of the culprit. Often, a combined approach is used, in which fillers with similar facial features are selected from a pool of description-matched photos.

For decades, experts have disagreed on and puzzled over the question of what is most effective, while also being fair to the suspect. There are concerns that using fillers that are too facially similar to the suspect will confuse eyewitnesses and protect guilty suspects by making the identification task too difficult. Conversely, if the fillers are too facially dissimilar to the suspect, there are concerns that this would put an innocent suspect at risk of being falsely identified.

The new approach relied on insights from signal detection theory – which considers the memory strengths that are generated by each face in the line-up in the mind of the eyewitness – to deduce that selecting fillers who are not facially similar to the suspect from a pool of acceptable description-matched photos actually increases the ability of eyewitnesses to discriminate between innocent and guilty suspects.

Importantly, this approach did not have any effect on the number of ‘false alarms’, in which an innocent suspect is incorrectly identified.

Study co-author Melissa Colloff, of the University of Birmingham’s School of Psychology, said: “Eyewitness misidentifications have contributed to many wrongful convictions, which are later overturned by DNA evidence. Eyewitnesses failing to identify a perpetrator when he is in the line-up can also result in guilty perpetrators being free to commit additional crimes.

“Although many useful reforms have been introduced to protect the innocent, sometimes these will also protect the guilty. Our approach demonstrates it is possible to create police line-ups that are more effective for everyone involved – increasing the likelihood that a guilty perpetrator will be identified, without increasing the likelihood that an innocent suspect will be imperilled.”