The extraordinary contributions of the behind-the-scenes heroes who work tirelessly to serve and protect the public have been celebrated at the Control Room Awards 2022. 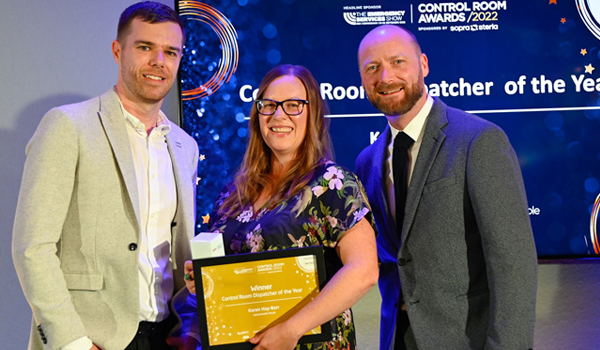 The awards are the only accolades of their kind, which recognise the selfless dedication of control room teams and individuals across the UK and abroad.

Representatives from across the control room community gathered at the NEC in Birmingham, where the winners of this year’s Control Room Awards were celebrated.

The ceremony took place on the opening day of the Emergency Services Show and featured many inspirational stories of professionalism, dedication and resilience.

The awards are organised by founder Mike Isherwood. He said: “The Control Room Awards were launched to shine a spotlight on the remarkable work of so many outstanding individuals and teams in control rooms for the emergency services and critical control operations.

“This is an inherently humble community that rarely shouts about the life-saving work its members do every single day, instead focusing on keeping the public safe. That’s why it’s so important that these awards exist, to give these amazing people and their work much-deserved recognition.

“The quality and depth of the judging pack this year tells you how inspiring this community is. The judges had an incredibly difficult job choosing the winners and every team and individual nominated or shortlisted should feel immensely proud of the important work they do.

“I would like to congratulate all of the winners and also say a huge thank you to all of our sponsors and partners for making this year’s event such a success.”

The full list of Control Room Awards 2022 winners is:

The judges said: “Karen was nominated primarily for the very significant role she played as dispatcher in a major incident involving a double murder of a young woman and her nine-year-old son in their home and the later stabbing of a police officer.

“She put herself forward for the dispatcher role and acted with impeccable professionalism and calmness in directing resources and coordinating with other agencies. Her role played a vital part in the suspect being arrested without further casualties.”

The judges said: “Tom goes far above and beyond his role in his work in the local community. He is passionate about water sports and enabling people to enjoy the water in a safe environment.

“He is a dedicated fund-raiser, a tireless organiser of life-changing experiences and promotes positive collaboration between agencies to bring the community together.”

The judges said: “Helen is a tremendous ambassador for the fire service, committed to promoting fire control and the vital role it performs.

“She embodies the traditions of London Fire Brigade and shows passion and creativity in promoting the control room in the community and bringing its work to life.”

Team of the Year (sponsored by the Emergency Services Show): Herts Careline.

The judges said: “Herts Careline’s control room team performs a vital role supporting thousands of people with medical conditions and vulnerabilities and delivers outstanding results for the organisation and the community it serves.

“The team and its members are clearly dedicated to the people who depend on the services Herts Careline provides and take great pride in supporting them, often in critical situations.”

The judges said: “Natalie is a powerful advocate for a culture of high morale and wellbeing within the control room. Her colleagues testify to her kindness, compassionate and the support she offers to all members of the team.

“Initiatives she has led have included establishing a wellbeing room, where staff can go after an upsetting call.”

The judges said: “Although just 23, Jules is a Senior Maritime Operations Officer responsible for search and rescue on the River Thames. In this role she demonstrates extraordinary maturity and skills beyond her years and length of service in handling very challenging incidents.

“She is talented, dedicated, an outstanding performer and committed to her continuing self-development.”

The judges said: “Nicola is clearly a highly professional and skilled call taker with a track record of responding effectively to high-pressure emergency calls. In one case, she demonstrated tremendous skill in engaging with a caller and gathering information that ultimately led to a suspect being charged with murder.

“Nicola is also an outstanding role model and a tremendous support and an inspiration to her colleagues.”

The judges said: “Sophie has demonstrated amazing strength of character and positivity in the face of adversity. Less than two years ago, she suffered a stroke and lost all control of the right side of her body, despite being an apparently healthy young person in her 20s.

“She has made an astonishing recovery, returning to her as a dispatcher just four months after suffering the stroke, and is now set to achieve her ambition to continue her service to the community as a police officer.”

Award for Services to the Public: Dean Rogers, National Ambulance Service of Ireland.

The judges said: “Dean is totally committed to helping the public, as well as his colleagues. He demonstrates exceptional empathy, especially with children.

“His enthusiasm and dedication is shown in every call that he takes, in his additional role as a first responder when off duty and in his support for community charity events.”

The judges said: “Receiving no less than 11 nominations, Garry is a worthy winner of this award, named after John Gilhooly who served in the Scottish Ambulance Service control room for almost 30 years.

“With a wealth of experience amassed over 23 years, Garry is selflessly dedicated to HM Coastguard, to delivering great service to the public, and to supporting his colleagues. He epitomises the selfless service ethos of the control room community.”

The judges said: “Having served for no less than 37 years, Steve has dedicated most of his working life to the Lincolnshire Police control room.

“Across five decades he has seen it all, adapting successfully to multiple changes in structures, working processes and technology. Throughout his career he has remained a consistently positive and highly-motivated team member and inspiration to his colleagues. He is a fitting recipient of the Lifetime Contribution Award.”

The Control Room Awards formed part of the programme of events at this year’s Emergency Services Show, with the event also the Headline Sponsor of the awards.

David Brown, event director, said: “We were delighted to include the Control Room Awards within the line-up at this year’s Emergency Services Show.

“The show brings together all disciplines of the emergency services sector to share their experiences and mutual commitment to public safety. The winners and finalists at this year’s Control Room Awards are testament to the strength of this remarkable community.

“We hope everyone who attended the awards night enjoyed an evening of celebration with colleagues and friends.”