Police chiefs said they welcomed a “constructive meeting” with the Prime Minister and Home Secretary on Thursday (December 1) to discuss the response to criminal activism involved in some protest movements. 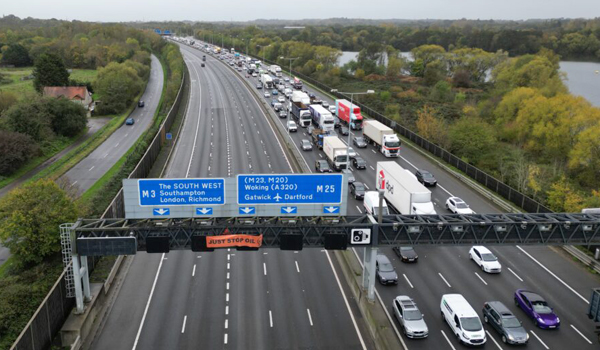 Prime Minister Rishi Sunak pledged that police will have “whatever powers required” to crack down on disruptive protests, following the meeting in Downing Street.

He called it “completely unacceptable” that ordinary people were having their lives disrupted by environmental protests.

“Police operate within a strict legal and human rights framework in relation to policing protest with a responsibility to appropriately balance the rights of the public who are going about their daily business lawfully and the rights of those protesting,” he said.

“There is a difference between protest and criminal activism. We are not anti-protest, but we are anti-crime.

“Police are committed to responding quickly and effectively to activists who deliberately disrupt people’s lives through dangerous, reckless, and criminal acts.

“Over the past year we have made over a thousand arrests, significantly boosted our specialist officer numbers to deal with sophisticated lock-on methods and responded faster to criminal acts thanks to improved intelligence and proactivity.

“We are fully prepared to deal with further disruption planned ahead of Christmas – acting quickly to minimise disruption for law-abiding members of the public.”

The meeting identified that the response to criminal activists involved in protests could be quicker and more effective with:

The NPCC said policing has improved its response to the criminal tactics of activists over the past year, including increasing the number of specialist removal officers by 63 per cent, with more than 500 officers now trained in debonding, over 400 specialists in removal, and more than 250 for “at height” removal across England and Wales.

“We are also carrying out proactive intelligence-led operations to track the continual change and development of tactics and targets,” it added.

The College of Policing has directly trained 230 Gold public order commanders, while more than 21,000 officers were trained in their force on public order under a licence issued by the standards body, said the NPCC.

Chief Constable Andy Marsh, chief executive officer at the College of Policing, said: “Our priority is keeping the public safe and ensuring people can go about their daily lives.

“We want to ensure there is a nationally consistent approach and we have already made significant changes to training so that officers can remove those who attach themselves to buildings or objects, making sure our response is swift, balanced and pragmatic.”

Metropolitan Police Service Commissioner Sir Mark Rowley and Assistant Commissioner Matt Twist were among the representatives of UK policing at the roundtable hosted at 10 Downing Street.

Following the meeting, Mr Twist, who leads on public order policing, said: “The actions of activists Just Stop Oil continue to take up valuable officer time that could be better used in local communities and dealing with priority crime.

“Whilst this week we have seen low level of activity by them, we still have to ensure we have officers on standby right across London to respond to any spontaneous action they may take, given we have no prior engagement. That meant yesterday we had 180 officers taken away from their day-to-day duties.

“Indeed, since they started their campaign on October 2, there have been 46 days of action which have taken over 12,500 dedicated officer shifts to police, equating to more than £5.5 million.

“Each day they come out, we have to be ready to respond to what their actions are based on, their behaviour, size of the group and if they have broken any law. We know it has been frustrating for Londoners this week seeing them walking slowly in the roads in central London, but as they have been small in number, and keep moving with traffic being able to move around them or easily divert, we are less likely to be able to arrest and prosecute them for unlawful obstruction.

“Everyone has the right to protest but some of their activity is not protest, it has been simple criminality – intent on disrupting London.

“When we see crime we will deal with it quickly. We have arrested 755 people to date, and have so far charged 182 for a range of offences from obstruction of the highway to conspiracy to intentionally or recklessly cause public nuisance.

“We are determined to work with the CPS to charge everyone who has brought misery to the public through their unlawful actions.

“They have made their intent clear, to carry out further protest, and we will continue to act and ensure Londoners can go about their daily business.”

The NPCC said that during the M25 gantry activities:

Next week, public order officers from across England and Wales will attend a national event called by the College of Policing to share knowledge and best practice for policing.

It will include public order commanders, the NPCC and the National Police Coordination Centre, which is responsible for coordinating the deployment of officers from across the UK to support forces during large scale events or operations.