More than four in ten people have not seen a uniformed officer in the last year, according to new figures. 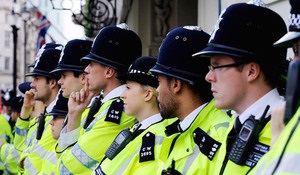 More than four in ten people have not seen a uniformed officer in the last year, according to new figures. Data gathered by Ipsos MORI shows that 44 per cent of people now claim they have not recently seen a visible police presence, up from 41 per cent the previous year and 36 per cent in 2015. Approximately 80 per cent of people said a regular uniformed presence is important to them, but only 17 per cent feel they currently receive one. More people are also feeling dissatisfied with the level of service they receive. However, overall public confidence in policing has risen following officers response to a series of terror attacks this year. Andy Fittes, general secretary of the Police Federation of England and Wales, said: If police forces have less then inevitably the public get less. There is no getting away from the fact that we simply do not have the resources to patrol as we once would have done. Police chiefs are having to prioritise things like terrorism and public events and to ensure that critical incidents such as responding to 999 calls are dealt with. Home Office figures published last year revealed officer numbers have fallen to their lowest levels since 1985. Around 20,000 officers have been lost over the last seven years and police staff roles have been cut even further. The Ipsos MORI figures, published on December 28, show 12 per cent of people have not seen uniformed personnel in the past year. Three in five respondents said the service they receive has remained unchanged, but the proportion who felt it has declined rose from 20 to 25 per cent. The researchers said this suggests some perception of decline in the performance of local police. Satisfaction with the police service remains constant at 53 per cent, slightly higher than in previous years, and more than twice as many people were likely to speak highly of their local police than criticise them. The report also highlighted a changing perception of local crime and policing as three in ten people now consider crime and anti-social behaviour (ASB) to be problems in their local area and 23 per cent consider it a larger problem than it was a year ago, up from 17 per cent in 2016. However, two thirds feel the rate of local crime and ASB has not changed. Fifty-five per cent of people are now confident in the services ability to provide protection during a terrorist incident, compared with 46 per cent in 2016, and the vast majority claimed policing is the most vital service during these emergencies. More than seven in ten people claimed policing deals with terror attacks effectively. National Police Chiefs Council chair Sara Thornton said the increase in public confidence is a real testament to the courage and professionalism of all of our officers and staff. She added: We know that local policing is absolutely crucial to countering terrorist plots, disrupting serious and organised crime networks and safeguarding the most vulnerable in society, so all chief constables are working hard to ensure the service is as visible and approachable as possible. We are also continuing to drive forward our ambitious transformation and reform programme to develop the modern capabilities that we need to tackle the threats that we face in 2018 and beyond. HM Inspector of Constabulary Matt Parr said: After a year in which the emergency services have faced some of the most challenging incidents in recent times, it is encouraging to see that the publics confidence in the police to protect them against terrorism has increased markedly, with over half of people saying they are confident in the police response. Research carried out for us by Ipsos MORI has demonstrated that the public still value their local police force. Most participants  around two thirds  identified that the response of police to emergencies was the most vital service, and almost three quarters of respondents thought the police was effective in doing this.