A new smartphone app that will provide an additional channel for the public to report non-urgent incidents to Cleveland Police was unveiled on Monday morning (September 26). 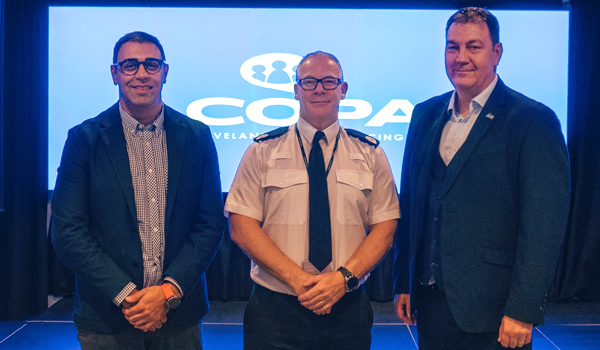 Cleveland police and crime commissioner (PCC) Steve Turner said the app, which he believes is one of the only apps of its kind in the country, gives residents another opportunity to engage with the police and his office.

It has been developed by local digital agency Alt Labs in partnership with Cleveland Police.

COPA will provide routes for people to report crime to Cleveland Police, by directing to its website or via an emergency 999 call button.

Users will also be able to feed in community-wide concerns, provide feedback on Cleveland Police and access information about victim support services.

Mr Turner said: “It has been my vision since deciding to run to become PCC to give residents the option to engage with police via a smartphone app.

“It makes complete sense to me that we utilise the developments in technology not to replace existing methods of contacting police, but complementing and supporting them.

“Through COPA, we can reduce demand on the police and direct people to the correct organisation for non-policing matters – improving the service communities receive.

“I’m delighted to be launching COPA, which remains one of the only apps of its kind in the country. Through the information provided by communities, we can help make Cleveland a safer place to be. ”

It was feedback from communities about contacting Cleveland Police that prompted Mr Turner to consider introducing a smartphone app, as well as the growing demand on the force from the 101 non-emergency number.

Between April and June 2022, Cleveland Police received 57,922 non-emergency calls – an increase of ten per cent on the previous three months.

Assistant Chief Constable Paul Waugh said: “The force has worked in consultation with the Office of the PCC on the development of the reporting app which will provide an additional channel for the people of Cleveland to report non-urgent incidents.

“I am sure that this will be a great success and prove to be a vital tool for the residents of Cleveland to communicate any concerns to Cleveland Police.”

Alt Labs hosted a number of development sessions with the PCC, members of his team and representatives from Cleveland Police to build a bespoke product suitable for Cleveland’s communities.

COPA went through rigorous testing and development phases, before being trialled with a pilot group of around 150 stakeholders for live testing.

Alt Labs chief executive officer Imran Anwar said: “It is great to see the COPA app launch to the wider community, enabling people across Teesside to report concerns and signposting to wider assistance.

“In developing the app, we worked closely with representatives within the PCC and Cleveland Police to ensure key elements were incorporated.

“The app has undergone a rigorous development process and has been built in-line with all existing Cleveland Police security protocols.

“It has a user-friendly interface to maximise engagement and is an innovative approach to community outreach.”