The National Police Chiefs Council (NPCC) has added to the growing pressure on the Government to find additional money for policing by spelling out the increased threat from terrorism and social unrest that has been created by continued cuts. 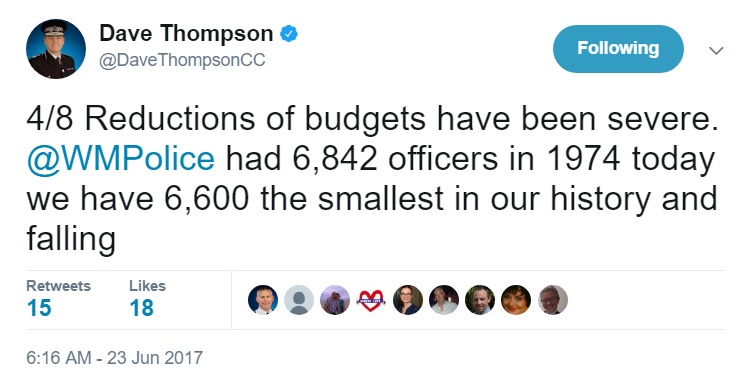 The National Police Chiefs Council (NPCC) has added to the growing pressure on the Government to find additional money for policing by spelling out the increased threat from terrorism and social unrest that has been created by continued cuts. West Midlands Police Chief Constable Dave Thompson, the NPCC spokesperson for finance and resources, has also called on chief constables to continue to make the case for “realistic investments”  stressing there is now growing public awareness and support for the difficulties facing policing. Several chief constables have recently spoken out about the impact of the last seven years` austerity measures on public safety and Mr Thompson says the service would now have a “challenge” to respond to the type of unrest seen in 2011 because budgets are decreasing in real terms. His intervention, as the voice of chief constables across the country, is likely to add pressure on Home Secretary Amber Rudd to seek additional funds from the Treasury. Mr Thompson said a series of major incidents to hit the country in recent weeks has laid bare the strains faced by forces under financial pressure, raising the risk of a breakdown akin to that which hit the prison service in 2016. However, Mr Thompson, who calls on the Government to protect frontline policing and cut bureaucracy, warns that it takes time to recruit and train officers  hence the need for urgent funding. Ms Rudd gave her first indication that an increase in funding is possible when she told the BBC that the Government will ensure forces have the resources they need and became the first senior minister to accept that police forces have been stretched by the four terror attacks this year. But Mr Thompson warned that much of the response to major incidents comes from core police budgets. The firearms commanders, casualty bureau, custody staff, body recovery teams and uniformed officers patrolling crowded spaces that are so central to preventing and responding to a terror attack are paid for by core police funding, he said. Over two thirds of the policing effort after the Westminster attack was not counter-terrorism funded. This figure will be much higher following the Manchester attack. Once inflation and cost pressures were accounted for there would be less money every year for forces on top of real-terms cuts of 18 per cent since 2010, Mr Thompson warned. The squeeze has left police and crime commissioners needing to increase local taxation to the maximum while many forces are using considerable reserves to maintain current staff numbers, he said. Efficiencies can be found in the delivery of forensics, armed policing, surveillance and major investigations with the cash invested in other areas, Mr Thompson said. He warned counter-terror policing is in no place to deliver efficiency savings and also called on the Government to cut red tape as a means to ease pressures. More than 40 years ago during the sustained UK IRA bombing campaign, Mr Thompson`s predecessor Sir Derrick Capper had 6,842 officers at his disposal. Despite the advantages of “different powers, tactics and technology”, Mr Thompson says WMP now has 6,600 officers to face the modern terror threat  the smallest number in its history. Its also time to ask why a growing proportion of the police budget is being allocated to managing complaints or non-policing spend at a time when our core role is under strain, he said. Mr Thompson said extra spending should target the growing cyber threat and urged policymakers to think very carefully about the need for enhanced protection for our officers who run towards the terrorists. He praised the incredible bravery shown by officers involved in the response to the attacks in London and Manchester, while the display of public affection for the police recognised they are unquestionably the frontline of our nations security. However fighting the root causes of extremism cannot be done in the shadows or through more armed officers, Mr Thompson said. The