The chief constable of the Police Service of Northern Ireland (PSNI) has warned he is “deeply worried” about the force’s ability to maintain its level of service in the current financial situation. 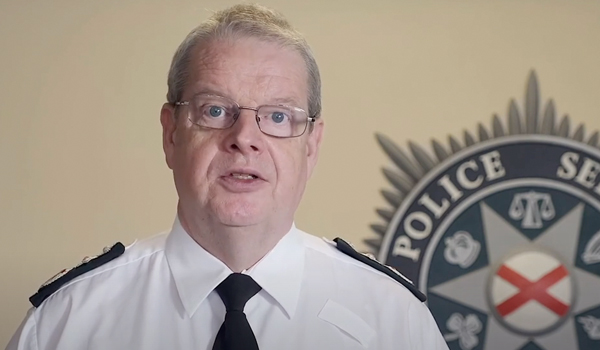 Simon Byrne said he has already taken the “regrettable” decision to scale back planned recruitment of police officers and staff as a result of a budget gap of more than £90 million, or £40 million after savings.

In his monthly accountability report to the Northern Ireland Policing Board (NIPB), Mr Byrne said that due to cuts required, by March 2023 there is likely to be the lowest level of police officers since the PSNI – celebrating 100 years of policing in Northern Ireland – was formed.

In his foreword to the report, he wrote: “The most unpalatable aspect of recent weeks and months is the ongoing and current financial situation faced by policing that is, in my view, without immediate intervention, no longer sustainable.

“Despite the actions I have taken alongside my Service Executive Team, and the call for action to the Department of Justice, the NIPB and wider political parties, as accounting officer, I remain deeply worried about the ability to maintain policing service provision in a way that the people of Northern Ireland deserve.

“The Board will be aware our budget gap for the year is now over £90 million, or £40 million after savings, and we are running out of short-term realistic options to cut costs yet further.

“It is still my intention at present, to hold our line about staffing levels that support a swift 999 response and visible neighbourhood policing, but even that may start to look different in the coming months.

“Although we have also continued to make efforts to reduce bureaucracy and exploit recent investments in IT, there will be difficult decisions about where we sustain numbers in uniform operational support roles, intelligence collection and investigations.”

Mr Byrne said ss the year has progressed, a number of new and additional pressures have emerged, including the likelihood of an average five per cent pay award and ever increasing utility/fuel costs.

He added: “The financial outlook is also affecting the recruitment position for the organisation, where we have regrettably taken the decision that there will be no further appointments to the student officer campaign in 2022/23 beyond those offers already made to candidates to commence training in October 2022.

“This may also affect promotions and broader development opportunities within the organisation as well as the crucial issue of the representation of our workforce.”

By the end of the financial year, Mr Byrne said the PSNI’s police officer headcount will have shrunk in real terms by more 300 officers, with staff roles also reducing .

“What is not changing is the volume of our work. We must all consider whether this is a continued defensible position and the senior team and I, alongside the Policing Board, have work to do to shape public expectations going forward,” he added.

Mr Byrne said he has already written to the Department of Justice to highlight  his concerns about the “increasing size of the financial gap, the rising cost base, the lack of clarity on budgets and the shortening time-frame to take what limited mitigating actions may be available”.

“The response from the Department only noted the pressures, confirmed no further funding from HM Treasury for NI Protocol and provided no further certainty, highlighting tough decisions will be required,” he said.

“As a direct result, I have already asked for the planned recruitment of police officers and staff to be scaled back this year and have commissioned work internally to assess what further reductions can be made.

“However, given the programme of reductions currently underway, the limited time available (six months) and the scale of the £40 million pressure (equivalent to a further ten per cent budget cut), I am not confident that despite our best prudent efforts, costs can be contained within the existing ‘Contingency Planning Envelope’.

“Without doubt, all of this will directly impact on our resource levels and ability to deliver the policing service that our communities deserve and the breadth of ambitions outlined in the Policing Plan.

“To be clear, although our plan was to end the year with 6,768 police officers, the funding position means that the last student intake this year will be in October, meaning that we are now likely to reach March 2023 with the lowest level of police officers since the police service was formed. Police staff recruitment will also be more limited, with the filling of priority posts only.

“This is a regrettable position, particularly for candidates awaiting appointment from the student officer merit list and we have already communicated with those directly impacted.”