A “powder keg” sporting event compelled a force to place a “policing footprint” across Belfast and has left a football club facing part of a bill of almost £100,000. 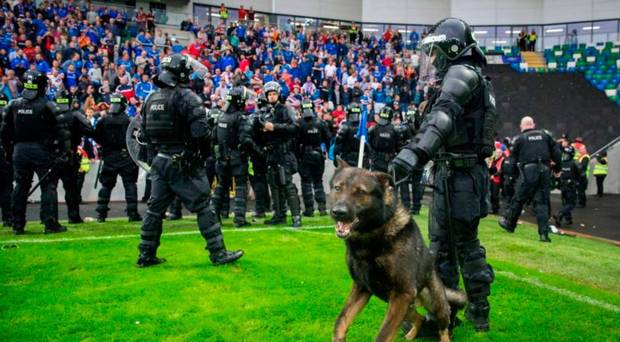 A “powder keg” sporting event compelled a force to place a “policing footprint” across Belfast and has left a football club facing part of a bill of almost £100,000. The massive operation was put in place for the high-profile Champions League qualifier between Scottish Premiership title holders Celtic and the province`s semi-professionals, Linfield FC. Scores of Police Service of Northern Ireland (PSNI) officers in protective equipment were drafted in and steel barricades erected for the match on July 14. And special units were also deployed at “key interface locations” and near licensed premises showing the match on TV across the city. Now it has emerged that the total cost of policing the entire event was £97,059. The figure, which includes officer duty and overtime as well as barrier deployment, was revealed in a Freedom of Information request to the force. The PSNI said Northern Ireland Football League Premiership champions Linfield FC would “cover the costs” related to officers who were on duty inside the Windsor Park stadium in Belfast. Superintendent Norman Haslett said: “In line with our charging policy… we will be recovering costs for the provision of special policing services within the stadium from Linfield Football Club. “These resources were requested by, and agreed with the club, prior to the fixture.” Security worries had dominated the build-up to the fixture  the first time the sides had met. Added to the PSNI`s concerns was the fact the tie was originally scheduled for July 11 or 12  with the “heightened tensions” of the loyalist marching season. Eventually it was agreed to push it back to July 14, with an earlier 5pm kick-off. However, the game was still marred by a series of missile-throwing incidents. It is understood Linfield will have earned up to £1 million from the game, once prize money, gate receipts, television revenue, advertising and merchandising are factored in. However, some of that return will have to be redirected towards the policing cost. Supt Haslett said the match was a significant sporting event at a time of heightened tension. It was policed in a manner and style “appropriate and proportionate to the threat and risk presented”. “The operation was developed in collaboration with UEFA, the football clubs themselves and all other relevant partner agencies,” he added. “In addition to having officers deployed in and around the stadium performing public safety and traffic management roles, it was also appropriate to have a significant deployment of local and specialist police officers at key interface locations and near licensed premises showing the match on TV across Belfast. “The costing for the operation therefore includes not only that for police in the National Stadium and in its immediate environs, but also in providing a necessary policing footprint right across the city during and after the match.” The parties have agreed in principle on Linfield`s “percentage” of the final amount due but not settled “on the legalities”, a force spokesperson added. The football club did not respond to a request for comment by Police Professional. Footnote: Celtic won 2-0 at Windsor Park and triumphed 4-0 in the return leg in Glasgow, to advance 6-0 on aggregate to the group stages.