A cartoon cat has been used by the Metropolitan Police Service (MPS) to make anti-crime warning messages more memorable and less about trying to frighten people into changing their behaviour. 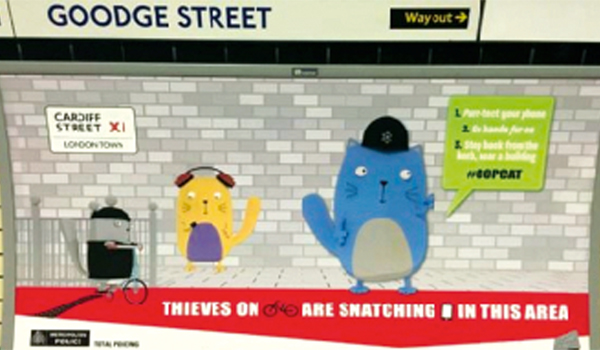 A cartoon cat has been used by the Metropolitan Police Service (MPS) to make anti-crime warning messages more memorable and less about trying to frighten people into changing their behaviour. Created by the Universities Police Science Institute (UPSI) at Cardiff University, the initiative was trialled in London last year to warn of thieves on bikes stealing mobile phones in London. The #Copcat campaign used humour and puns to make the warnings more likely to be remembered, reminding the public to purr-text your phone and go hands fur-ee, in a bid to keep phones out of the hands of thieves. Professor Martin Innes, Director of UPSI, which is part of the Crime and Security Research Institute at Cardiff University, explained: Most crime prevention images are designed to frighten people into changing their behaviour. We designed an experiment where we ran two campaigns  a very traditional campaign designed to change peoples crime prevention behaviour versus our more experimental campaign and saw what the results were and how they were different. We tried to use humour and cartons to change how memorable the messages were for members of the public. Traditional warning images and the cartoon #Copcat images were on display in Underground stations around Camden and Islington boroughs during 2016. People were exposed to the campaigns when they stepped on and off the trains, and officers handed out leaflets at stations, together with a social media campaign. What we saw was people were far more likely to remember the cartoon cat and the advice he gave than they were for a far more traditional police campaign, said Professor Innes. The work was done in conjunction with the College of Policing, so once weve understood the nuances in our data and our findings, were hoping that this has got the potential to roll out and go nationwide. The #Copcat trial was inspired by recent research at the UPSI, which found that messages from empathetic, sympathetic messengers were more likely to be remembered than traditional fear-framed messages, which try to frighten people into changing their behaviour. Researchers conducted a large-scale social experiment with members of the public about their attitudes and behaviours in relation to crime prevention. The experiment was introduced by a cartoon cat, an animated character designed to be both funny and engaging, but whose presence also allowed researchers to test how far these are salient qualities for people as they take on board new information on the subject of preventing crime. Each film was purposively designed to test a number of behavioural mechanisms that may be relevant to understanding what kinds of preventative message most resonate with people as a precursor to behavioural change. Professor Innes said these mechanisms are associated with the Nudge theory (Thaler, R & Sunstein, C, 2008 Nudge: Penguin Books), and draw on evidence from behavioural economics and social psychology, allowing, for example, a study of the role played by humour, emotion and norms of behaviour. Having watched the films, participants were questioned about their reactions to the information they saw. This data was collated and analysed for more than 1,000 people aged between 16 and 96. The results shed light on the relative effectiveness of adopting different types of message, messengers and mechanisms for conveying crime prevention information to the public. They formed the basis of principles of Behavioural Crime Prevention, a number of which were subsequently tested by the UPSI in the campaign with the MPS on preventing snatch theft of mobile phones. The experiment is part of a wider project called Nudges, Tugs and Teachable Moments, funded by the What Works Centre for Crime Reduction. The UPSI says its overall purpose is to create an evidence base for understanding how far people can be persuaded to adopt more preventative crime behaviours, if they must be compelled to do so by law or sanction, or if there exists an optimal time w