Police Scotland is working with local authorities and the charity Stop It Now! Scotland in a two-month campaign to target the online viewing of sexual images of children. Our ultimate goal here is to protect children, said Detective Chief Inspector Brian Stuart of Police Scotlands Cyber Crime Unit (East). 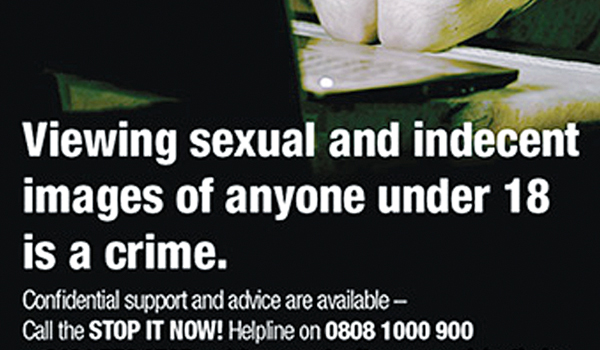 Police Scotland is working with local authorities and the charity Stop It Now! Scotland in a two-month campaign to target the online viewing of sexual images of children. Our ultimate goal here is to protect children, said Detective Chief Inspector Brian Stuart of Police Scotlands Cyber Crime Unit (East). Stop it Now! Scotland  the Scottish arm of The Lucy Faithfull Foundation, which is the only UK-wide charity focused solely on preventing child sexual abuse  said that in 2016 alone, 1,600 people had sought its help to stop looking at sexual images of children online. This was either through the charitys confidential helpline or from the self-help section of its website. Stop It Now! provides confidential and anonymous support to people who are having sexual thoughts about children and young people, supporting them manage these and control any associated behaviour. Stuart Allardyce, national manager of Stop it Now! Scotland, said it had worked with hundreds of men arrested for viewing sexual images of children. For many, being arrested was a real wake-up call. Many knew what they were doing was wrong, but struggled to change their behaviour on their own. Thats where our work comes in, he added. We make sure these men understand the harm they have caused the children in these images, and also the serious consequences for them and their families if they dont get to grips with their online behaviour. Once they understand this, they become far less likely to reoffend. But there are thousands of men out there viewing sexual images of under-18s. We need to get to them too, to help them understand what they are doing is illegal and incredibly harmful to the children and young people in the images  and to get them to stop. Between April 2016 and March 2017, Police Scotland officers recorded 51 crimes of possessing indecent images of children in Edinburgh and 80 in the Lothians and Scottish Borders, with 98 per cent of these solved so far. This compares to 69 crimes recorded between April 2015 and March 2016 for Edinburgh and 62 across the Lothians and Scottish Borders. Of those, 97.5 per cent were solved. Police Scotlands Cyber Crime Unit (East) is dedicated to investigating those who view sexual images of anyone under 18. Accessing these images is not a victimless crime. A child is re-victimised every time an image of them is viewed and this creates further demand for these appalling materials, said Det Chief Insp Stuart. We have a highly experienced and dedicated Cyber Crime Unit with access to extensive investigative techniques to pursue perpetrators of these crimes. The consequences of this behaviour for an individual are life-changing and can include losing their job, being imprisoned and registered as a sex offender. The campaign is being supported by the City of Edinburgh Council, West Lothian Council, Scottish Borders Council, East Lothian Council and Midlothian Council with Police Scotlands partners in NHS Lothian and NHS Borders. Michelle Miller, head of Safer and Strong Communities and chief social work officer at the City of Edinburgh Council, said: The reporting of these crimes is increasing. This is a result of greater awareness and a growing willingness on the part of victims and the public to report. Partner agencies, working together, have increasingly sophisticated ways of detecting these crimes; however, the main focus of this campaign is prevention: first and foremost, of the harm caused to children, but also of the impact on the adults involved.