Chief police officers have welcomed the “encouraging” uplift of public reporting after a dramatic surge in calls to a confidential hotline followed an unprecedented wave of terror attacks to hit the UK. 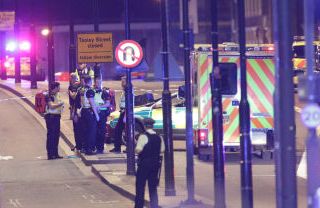 Chief police officers have welcomed the “encouraging” uplift of public reporting after a dramatic surge in calls to a confidential hotline followed an unprecedented wave of terror attacks to hit the UK. Calls to the National Police Chiefs` Council (NPCC) dedicated anti-terror telephone number rocketed by more than 600 per cent in just six months as thousands of potential leads poured in. Statistics obtained by a Freedom of Information (FoI) request suggest the flurry of incidents this year, in which dozens of victims were killed or injured, prompted a spike in the volume of information passed to authorities by members of the public. The NPCC hotline, operated by the Metropolitan Police Service (MPS), was set-up so that people can pass on suspicions about possible terrorist activity. The jump in calls to The Confidential Helpline resonates closely with figures published earlier this month showing that referrals from the public to the Government`s Prevent anti-extremism scheme have doubled since the London and Manchester atrocities. There is a definite spike in the reporting of these issues, says the NPCC. “We are seeing the public reporting to us with heightened concerns and greater awareness,” said an NPCC spokesperson. “It is encouraging that people are coming forward to report more information to the authorities, which is always welcome.” Reports to the hotline peaked in June, when the London Bridge and Finsbury Park attacks took place, with the service receiving 5,703 calls. This compared to 748 in January and 764 in February, and a monthly average over the year to June of around 1,800. The number of calls rose to 2,449 in March, the month of the Westminster outrage, before dipping to 1,412 in April and then increasing to 4,191 in May, when the Manchester Arena bombing occurred. The NPCC data shows a sharp rise in contacts with the hotline in the last two years. It received 22,729 calls in the year to the end of June 2016 – almost double the tally of 11,892 in the previous 12 months. The service took 21,596 calls from July 2016 to June 2017. Detective Chief Superintendent Clarke Jarrett of the MPS Counter Terrorism Command said: We need the publics assistance to help keep us all safe from terrorism. “Every report we receive about suspicious activity is potentially crucial information that could help keep communities safer. Hannah Stuart, co-head of the security and extremism unit at think tank Policy Exchange, said it was not surprising that rises in the number of calls correspond to recent terrorist attacks. She added: Community-based intelligence is vital in tackling terrorism and in some cases has successfully prevented imminent attacks. Unprecedented numbers of individuals of concern to the security services in the UK right now means the task of identifying serious leads is a real challenge. In light of the recent attacks, risk assessment procedures are currently under review  and this will no doubt include the handling of calls to the anti-terrorism hotline to make sure that information reaches the right people when necessary. Despite this increase, forces want even more support from communities and have urged people not to wait until after a major incident if they have concerns about someone being drawn towards extremism. The anti-terrorist hotline is staffed around the clock by specially-trained personnel, with additional resources available if there are spikes in calls. While it is not known what proportion of calls are acted upon or lead to investigations being launched, the NPCC wants communities to report anything suspicious and “let us decide if it is important”. Officers say information from members of the public has contributed to stopping attacks and assisted in a third of the most high-risk investigations. Earlier this year it emerged Khuram Butt, 27, the ringleader of the London Bridge terror gang, had been reported to the hotline and investigated in 2015, but officers found no evidence of attack planning. C