Overstretched traffic officers are suffering the worst pressure in decades as anti-drink-driving enforcement activity has fallen by a quarter since 2011, new research claims. 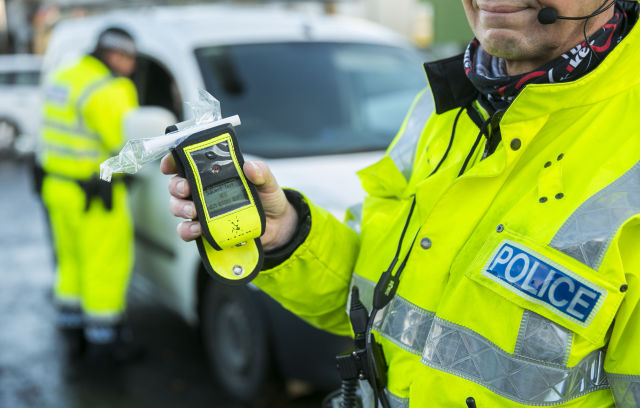 Overstretched traffic officers are suffering the worst pressure in decades as anti-drink-driving enforcement activity has fallen by a quarter since 2011, new research claims. The number of roads policing officers employed by cash-strapped forces in England and Wales also fell by 27 per cent in the same period, a report by the Institute of Alcohol Studies (IAS) reveals. If breath tests were still at 2011 levels, 260,681 more would have been used, it calculates. The average roads policing budget also steadily declined, by almost £1 million per force. These figures have emerged with campaigners arguing that falling numbers of drink-drivers being stopped by traffic officers are set against a backdrop of no significant changes to drink-drive deaths in the UK  stalled at around 240 between 2010 and 2014  leading to fears that educating motorists was no longer enough to stop them from driving while drunk. England and Wales stand apart from all other nations in Europe  including Scotland and Northern Ireland  in having a drink drive limit of 80mg of alcohol per 100ml of blood. Other nations limits are 50mg/100ml or lower. Alongside greater enforcement, research suggests that if England and Wales followed suit, lowering the limit would save at least 25 lives and prevent 95 serious casualties a year, as well as £800 million in costs. While budgets continue to be squeezed, approximately 200 lives are being lost on our roads to drink-drivers every year, said the institutes chief executive Katherine Brown. This report highlights the damaging impact of police cuts on the ability of roads officers to do their job properly and enforce the law against drink-driving. Where enforcement levels are on the wane, more public campaigns would raise awareness about the dangers of drink-driving, and a lower drink drive limit would provide a cost-effective way of limiting the risk of people getting behind the wheel after consuming alcohol. Dorset Police has seen a 25 per cent reduction in dedicated traffic officers since 2009 and this year its road fatality numbers have already reached a higher level than in 2016. Dorset Police Federation chairman Tony Tester said: We`ve definitely lost that visible presence of traffic officers on our roads, that is a fact. Add this into the total number of officers lost, and it is a worrying picture. When an officer was on patrol, they would see more, and stop more vehicles, and be able to carry out more breathalysers. Now, patrol officers are going from job to job. We`ve lost that aspect of policing due to cuts. It`s been slashed. The pressure and demand on traffic officers and front line officers has never been so great in the whole of my 30 years of service. Experts blame a hard core of drink drivers not responding to efforts to make it socially unacceptable for a stalling in the number of people killed on the roads. After years of falling deaths as a result of drink driving, the figure remained static at around 240 between 2010 and 2014. In 2015, the most recent figures available, there was a drop to 200, but a spokesperson for the Parliamentary Advisory Council for Transport Safety (PACTS) said the overall numbers were too low for this to be seen as a definitive reduction. Official figures from the Department for Transport also show that the total number of casualties increased between 2014 and 2015, from 8,210 to 8,470. The PACTS spokesperson said that it is concerned motorists were starting to take drink-driving less seriously, adding: We are worried people are becoming more relaxed and blasé about it because they think there are fewer police out there. Last week forces in England and Wales revealed that during last year`s Christmas crackdown they stopped more than 100,000 vehicles, with 5,698 breath tests that were positive, failed or refused. Introducing the report, Labour peer Lord Brooke of Alverthorpe said: Support has been demonstrated from charities, road safety organisations, publicans, and the publi