The remarkable heroism of three officers who overpowered and arrested a mentally ill man who plotted to shoot police has been recognised with a national bravery award. 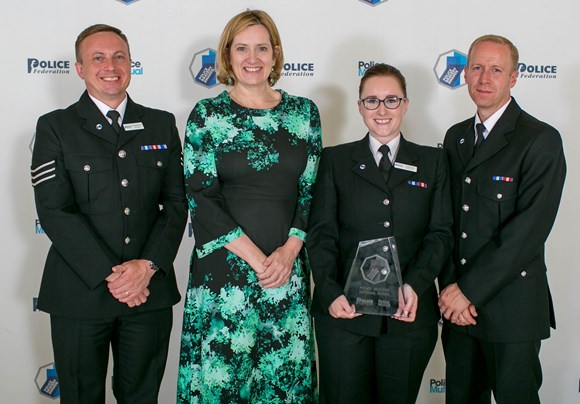 The remarkable heroism of three officers who overpowered and arrested a mentally ill man who plotted to shoot police has been recognised with a national bravery award. Sergeant Elliott Richardson and Police Constables Sarah Currie and Michael Otterson took home the top prize at the Police Bravery Awards on Thursday (July 13). PCs Currie and Otterson tracked a wanted man suffering from schizophrenia to a pub in Gateshead in September 2014 where the suspect held them at gunpoint. When Sgt Richardson arrived at the scene he found the PCs locked in a struggle with the man during which the firearm was discharged. With help from a member of the public, the three Northumbria Police officers disarmed the man and took him into custody. In a subsequent interview the man claimed he had deliberately planned to harm police officers to draw more attention to his mental illness. A search of his belongings revealed he was armed with two handguns, a crossbow, several throwing knives, explosives, smoke grenades and a baseball bat, as well as body armour. He was sentenced to an indefinite hospital order. Presenting the award at a ceremony in London, Home Secretary Amber Rudd said: Its because of the instinctive actions and remarkable heroism of PCs Currie and Otterson and Sergeant Richardson that a horrifying incident was stopped and an imminent threat to public safety was averted. I pay tribute to their quick thinking and selflessness, which put them in between the public and a dangerous situation. The Police Bravery Awards can honour only a few special acts by a handful of officers, but each of these nominees epitomise the commitment and dedication to duty we see across our police forces every day. PFEW chair Steve White said: This year perhaps more than most, the public realise the threats we face every day, and the heroic efforts of our officers, most of which goes unreported. As chair of the Police Federation of England and Wales, I am immensely proud to have hosted this significant event and to share this day with such well deserving nominees and winners. Congratulations to you all.

Sgt Elliott Richardson, Home Secretary Amber Rudd and PCs Sarah Currie and Michael Otterson North West Other regional winners selected from across England and Wales include Police Constable Robert Shakespeare from Greater Manchester Police (pictured received his award from Victims Commissioner Baroness Newlove), who won the Region 1 (North West) award after he pursued and wrestled an armed youth to the ground. On June 15, 2016, PC Shakespeare was developing intelligence on another matter when a call came over the radio concerning a teenager wearing a balaclava cycling around the area. All the callers reported that they believed he had a firearm. PC Shakespeare saw the youth in a food takeaway shop, threatening staff with a firearm, before getting on a push bike and cycling off. The officer followed in his car, and saw that the youth was holding a handgun. With genuine concerns for the public, PC Shakespeare took positive action, clipping the wheel of the cycle, and then running after him. Despite twice having the gun pointed at him, PC Shakespeare continued to pursue the teenager, eventually tackling him to the ground after he discarded the weapon, which later turned out to be an imitation handgun. On receiving the award from Baroness Helen Newlove, PC Robert Shakespeare said: It wasnt the most appropriate method to deal with it [he knocked the gunman off his bike with his car] but I just used what I had to hand.   But he denied he was a hero: Everybody here at the awards is just so impressive that I really didnt expect to win this award  it was just a case of you have got to do what you have to do to resolve it.  He said he had been shot at before,