Police Scotland has recognised and celebrated the outstanding achievements and bravery of its officers and staff and members of the public.

Chief Constable Iain Livingstone QPM said the awards come at the end of a year that has underlined the “relentless and challenging nature of policing”.

The Chief Constable’s Bravery and Excellence Awards were held virtually on Friday (February 19) due to the pandemic, with officers and staff and award winners and their families able to view the ceremony remotely from across the country.

Mr Livingstone presented 25 bravery awards to 31 police officers and 16 members of the public.

Among those receiving an award were:

Police Constables David Murdoch, Phoebe Pritchard, Michael Shields and Allan Wardrop, who bravely entered a building on fire on Ayr High Street in May 2020. The building was well alight and many residents were asleep due to the time of day. Their courageous actions led to the rescue of many people and prevented any loss of life; 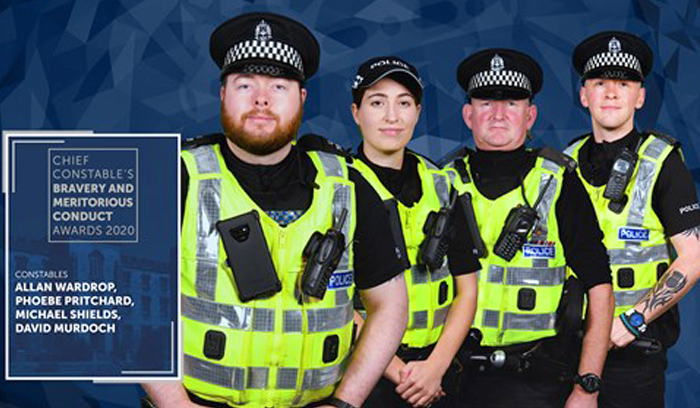 Detective Constable Glynn Powell, who entered the Water of Leith while off-duty to rescue a three-year-old child who had fallen into the river in September 2020. He administered emergency first aid after pulling the child to safety. The girl went on to make a full recovery; and

Dr George Parsonage, who has been involved in more than 2,000 rescues on the River Clyde over the course of 40 years’ involvement with the Glasgow Humane Society. He has worked closely with police and the other emergency services throughout this time and his expertise in river rescue is highly renowned. 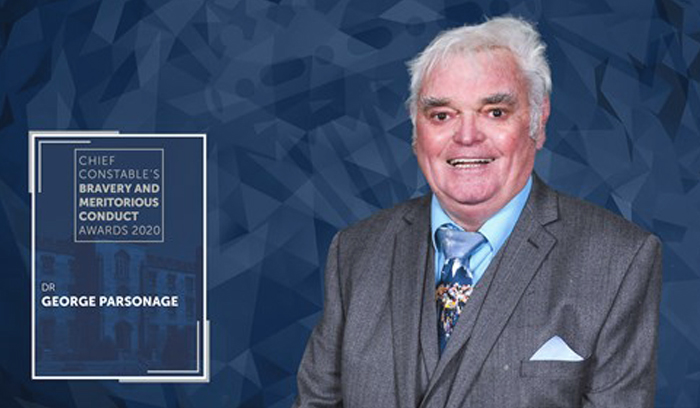 Police Officer of the Year was named as Detective Inspector Michael McCullagh of the Cybercrime Investigations Unit for his instrumental work in helping develop the overall understanding of cybercrime in Scotland.

Policing Partner of the Year was awarded to Castlerock Edinvar team leader Cheryl Neill. She worked closely with community officers to reduce anti-social behaviour and improve living standards at social housing run by the social landlord in Edinburgh.

Team of the Year was awarded jointly to Dumfries and Galloway Division CID and the National Wildlife Crime Unit for their investigation into poisoning incidents involving birds of prey in the Stewartry area. This investigation led to an individual being convicted of wildlife crime offences. 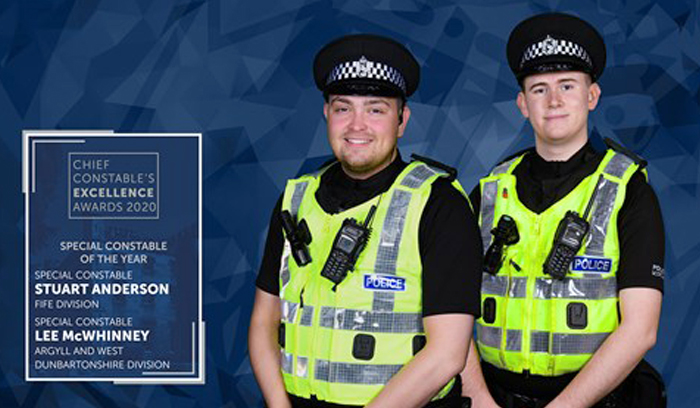 Mr Livingstone said: “The last 12 months have underlined the relentless and challenging nature of policing.

“Officers and staff are playing a crucial role supporting the national response to coronavirus. At the same time, they continue to meet the needs of our communities, providing day-to-day policing and responding to a number of demanding and high profile incidents.

“Today is an important opportunity to recognise and celebrate the outstanding policing which occurs all over Scotland, day in, day out, and to commend members of the public for the selfless acts of bravery and courage to help their fellow citizens.

“I extend my heartfelt congratulations to all our winners and nominees and thank them for their commitment to public service.

“I’m also grateful to Police Mutual for their continued support of this important event.”

Cabinet Secretary for Justice Humza Yousaf said: “The Bravery and Excellence Awards allow us to reflect on selfless acts of courage which have made a real difference to people at their greatest time of need and to recognise the innovative and high quality work by officers and staff from across the service, the Scottish Police Authority (SPA) and other partners.

“I want to thank all the officers, staff and members of the public, who were nominated for awards, for their service and support in these challenging times.

“I have always been proud of the dedication shown by our police officers and police staff, to keep us all safe, and the current pandemic has highlighted that the police workforce is highly adaptable in its response to new challenges.”

Martyn Evans, chair of the SPA, added: “These are truly extraordinary times but Police Scotland’s officers and staff continue to excel in challenging circumstances.

“Today’s awards ceremony gives us the opportunity to celebrate just a small number of examples of bravery and courage but we at the Authority acknowledge that examples like these are being carried out across Scotland on a daily basis as officers and staff work alongside partners and members of the public to keep Scotland’s communities safe.”

Sir Jon Murphy, chair of the Police Mutual Oversight Committee, said: “Each nominee is a credit to their family and friends, their communities, and the police service.

“We are always proud of your outstanding demonstrations of courage and I am delighted to also be able to recognise bravery and excellence in policing through our sponsorship of these awards.”

The Excellence Award winners are:

The Bravery Award winners are: