A giant video wall is the latest tool being used by Northamptonshire Police to warn people about burglaries and robberies and encourage individuals to keep themselves and their homes safe and secure.

A giant video wall is the latest tool being used by Northamptonshire Police to warn people about burglaries and robberies and encourage individuals to keep themselves and their homes safe and secure.

A community roadshow, incorporating an 18-screen high definition plasma video wall, was run in the Grosvenor shopping centre in Northampton for a week in May.

The force commissioned two 30-second adverts which will be played on the giant screen. One advert is an animated film warning people not to leave their doors and windows open at home and reminding people that in one in four burglaries in Northamptonshire offender/s get in through insecurities.

The second advert shows a reconstruction of a robbery where a youth is assaulted and robbed by two other youths. However, the incident is caught on CCTV and the offenders are arrested.

Staff from LBVTV, who are taking The video wall will be taken to various shopping centres across the country, and local officers will be handing out Safer Community Teams priority cards and burglary and robbery crime prevention leaflets alongside the plasma screen.

The burglary crime prevention leaflets are aimed at homeowners to help ensure they take measures to protect themselves from intruders.

The street robbery flyer is aimed at youths and gives useful advice on how to protect themselves from street robbery. Youngsters who take away a leaflet will also have the chance to win a £20 Boots voucher by answering a question about robbery crime prevention in a prize draw.

Sergeant Matt Phillips, from Northampton Town Centre Safer Community Team, said: “People will not be able to miss the huge video screen and we hope people stop and take a look at the important messages and take away the useful information leaflets.

“A large number of burglaries and robberies could be prevented by people acting on simple crime prevention advice.” 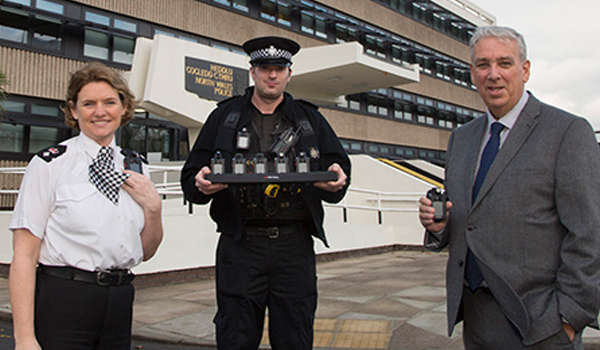 All frontline officers in North Wales to get BWV cameras