Bear in mind the lessons

At the official London launch of Sir Hugh Orde and Professor Sir Desmond Reas account of the investigation into the Omagh Bombing, senior figures reflected on the need to strive for justice even in the most difficult situations. 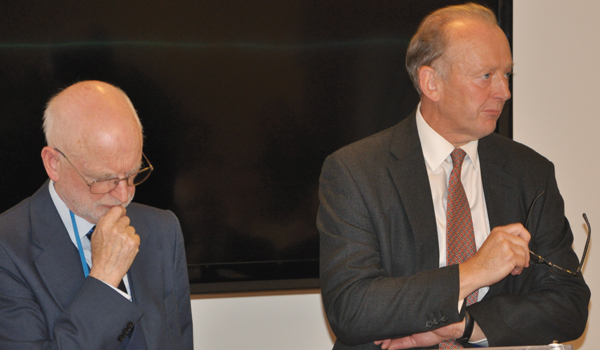 On August 15, 1998, Northern Ireland was struck by a terror attack that would forever change the face of policing in the UK. At approximately 3.11pm, a car bomb detonated on Omaghs Market Street, claiming the lives of 29 people and injuring hundreds more in what has since become known as the single worst atrocity of the period of violence known as the Troubles.

Nineteen years later, unanswered questions stemming from the Omagh Bombing continue to loom large over the police service. The lack of successful prosecutions in connection with the attack has compounded the suffering felt by the loved ones of those who died, and has added fuel to the clamour surrounding serious investigative failings by the Royal Ulster Constabulary (RUC).

As time passes, it becomes less likely that a satisfying answer will ever be provided. It is therefore critical that lessons from the case continue to be learned. In their new book, Bear In Mind These Dead: The Omagh Bombing and Policing, Sir Hugh Orde and Professor Sir Desmond Rea posit that discussions in the years since the attack have been dominated by two questions: whether intelligence was available that could have enabled the RUC to prevent the atrocity, and whether the ensuing investigation was sufficiently thorough. Both questions can be traced back to one of the most notorious criticisms of how the case was handled by police and intelligence services the allegation that just hours after the bomb detonated, the RUCs Special Branch had discovered the numbers of mobile phones that may have been used by the perpetrators.

It has been claimed that if this intelligence were shared more widely, it would have been possible to pass it to officers in An Garda Síochána and potentially identify those responsible. However, protocols in place at the time contributed to this golden opportunity for the investigation being missed.

There is no satisfying explanation that can be given for failings of this kind. To this day, addressing them still presents a serious challenge for the Police Service of Northern Ireland (PSNI), which was established to replace the RUC in 2001 following criticism by the then newly-created Police Ombudsman. However, the ongoing pain associated with the case means that any mistakes need to be acknowledged. Otherwise, legitimacy and public confidence will suffer.

In the aftermath of the Omagh Bombing, the PSNI recognised the need for clear accountability and worked hard to embed it throughout the organisation. The problems with information sharing were recognised, so its intelligence systems were centralised to facilitate easier exchange. Instead of attempting to cover up allegations of collusion, the force acknowledged that it had occurred, and reassured people that the new structures that had been implemented would ensure such behaviour would never happen again.

The same month that Sir Hugh took over as chief constable in 2002, the PSNI launched a raid on Sinn Fein offices in Stormont, sparking a controversy that led to allegations it was trying to undermine the peace process and the ultimate collapse of the power-sharing executive. Rather than downplay the incident, the PSNI quickly apologised and acknowledged errors of judgment in the way the search was conducted.

Sir Hugh believes the decision to admit this mistake was a crucial part of obtaining public forgiveness. This approach was reinforced by a commitment to transparency and engagement, both with the public and within the force.

Sir Hugh regularly met with campaigners and community leaders to hear their concerns and explain the forces actions. The PSNI granted Keir Starmer, who was then working as a human rights adviser to Northern Ireland, complete access to force briefings to enable him to provide independent criticism.