Two men have been charged after a haul of illegal firearms was intercepted at the Channel Tunnel. 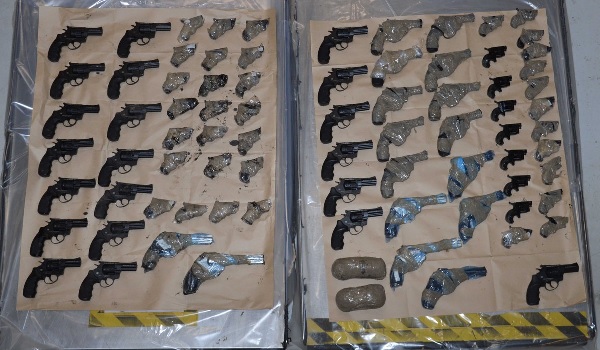 Two men have been charged after a haul of illegal firearms was intercepted at the Channel Tunnel. An investigation carried out by the Metropolitan Police Service (MPS) and the National Crime agency (NCA) over a number of days indicated that an importation of firearms was imminent over the weekend. This information was shared with Border Force officers based in Coquelles, France. A bright yellow Mercedes Sprinter van was stopped before it entered the Channel Tunnel on its way to the UK on Saturday (July 1). Officers discovered a large supply of viable 4mm and 6mm handguns and ammunition concealed in engine blocks  the largest seizure of firearms bound for the UK to date. Janusz Michek, 59, from Poland, was one of seven occupants of the vehicle and he was arrested at the scene. No further action was taken against the other six Polish nationals  four women and two men  arrested in Coquelles. Denis Kolencukov, 23, from the Czech Republic but living in the UK, was arrested as he arrived independently in Dover from Dunkirk, France. Michek and Kolecukov were charged with knowingly being concerned in the fraudulent evasion of a prohibition or restriction on a prohibited weapon or ammunition, and conspiracy to possess a firearm with intent to endanger life or enable another to do so. They appeared at Uxbridge Magistrates Court on Monday (July 3). Officers from the joint NCA-MPS Organised Crime Partnership (OCP) also searched an address in Slough, Berkshire with support from Thames Valley Police. Enquiries are ongoing. NCAs Deputy Director of investigations, Graham Gardner, said: This joint operation has resulted in a large number of viable firearms being taken out of circulation before they could reach the UK. While we are in the early stages of our investigation, I believe these weapons were intended for criminal use in either London or across the UK and it goes without saying the risk they would have posed to the public. Our recent threat assessment highlights that handguns are still commonly favoured by some criminal groups in the UK. They may not be the largest firearm, but they are easily concealable and lethal in the hands of anyone prepared to use them. Firearms related crime across the UK poses a significant threat to the public and the NCA are working with partners in the UK and around the world to combat this threat. The involvement of multiple agencies in this operation demonstrates the collective commitment to keeping people safe and maintaining the relative rarity of gun crime in the UK. Detective Chief Superintendent Michael Gallagher, from the OCP, said: “This joint operation highlights how we can work effectively with other agencies to combat serious and organised crime. I have no doubt that a number of these weapons were destined for the streets of London, where they would have caused misery and unspeakable damage to the community. “The seizure of these illegal firearms shows what can be achieved through cross-agency collaboration and we will continue to work together to protect communities, ensuring that we disrupt criminal groups from having access to these weapons.”