Six officers who responded to an incident in which two children were trapped in a drowning car were among more than 20 honoured at the third annual Scottish Police Federation (SPF) bravery awards. 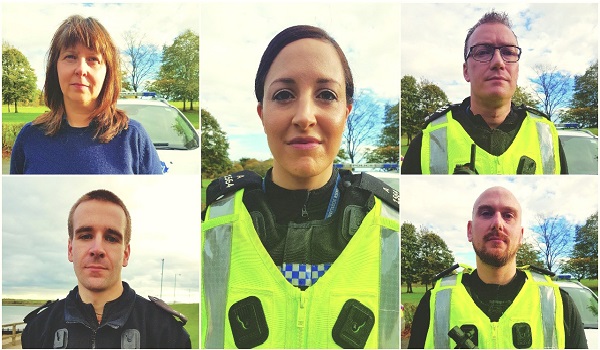 Six officers who responded to an incident in which two children were trapped in a drowning car were among more than 20 honoured at the third annual Scottish Police Federation (SPF) bravery awards. Sergeant Andy Sawers and Police Constables Kirsteen McArthur, Carolyn Wright, Calum McDougall, David Ritchie and John Grant, won the overall bravery award on Thursday (November 30). In December last year, the six officers were called to a collision in which a car was underwater in a river on its roof, with two sisters  Amy, 12, and Kirsten, 14  trapped inside. The father, who was driving, had managed to escape. As PC Wright managed to prise the door of the car open with a crowbar, PC McDougall and PC McArthur helped Amy up onto the embankment. However, Kirsten was still trapped in the car by her seatbelt fully submerged by water, and as officers managed to free her, she was unconscious and not breathing. PCs McDougall and Grant administered CPR on Kirsten for some time, but she later died in hospital. Sgt Sawers said: The whole team really pulled together so well, we just got things done that needed to happen. It was dark, confusing and freezing but everyone worked hard to save those girls. The team said while they are honoured to win the award, their thoughts remain with the bereaved family. PC Wright added: The fact that we were able to help one person makes you feel better about the whole incident. I still think about her regularly and wonder how shes doing now, because it must have been way more horrific for her than it was for any of us. Its kind of good, in a sense, that we were able to at least help her. Presenting the award to the officers, Justice Secretary Michael Matheson said: These heroic attempts, in extraordinarily difficult circumstances, to try to save the lives of two young girls, reinforce everything that we have come to expect from officers from Police Scotland. I commend their bravery and thank each of them for going above and beyond the call of duty to protect the public. Our sincere sympathies remain with the family who lost a loved one in such tragic circumstances. Lianne and Gary Duguid, parents of Amy and Kirsten, commended the officers for putting their lives before others, and thanked PC Kevin Ross who provided compassionate support to them. Also among the 23 bravery winners are PCs Michael Baxter, Derek Paton, David Robertson and Liam Burns, who collectively detained a man swinging a nail headed baseball bat and had also set fire to the block of flats he lived in. PCs Paul Brownlee and Greg Gavin saved the life of a man attempting to jump off a bridge on the River Esk, and PC Douglas was off duty when he prevented a woman from jumping off a bridge that crosses the M80. PCs Deborah Lawson and Robert Fitzsimmons intervened in a firearm incident in Glasgow, leaving them with significant injuries, while PCs Ian Fotheringham, Christopher Wood and Andrew Gamble saved the life of a 14-year-old girl who was being attacked by a dog. PC Christopher Starkie and PC Daniel Gabrielli saved the life of a 13-year-old following the death of his mother and younger brother in a swimming accident, while PC Brian Todd disarmed a drunken man armed with an air rifle while off duty. And PCs Daniel White and Alexander McCullough were awarded for subduing a man wielding an axe and a Stanley knife who had injured two members of the public and began to slash at his neck. SPF Chair Andrea MacDonald said every officer was surprised to win an award, as they believed they were only doing their job, but insists they were most certainly not only doing their job. These awards recognise the bravery of police officers across the country, some in the course of their duties, others who were off duty when the incidents happened, she added. Most of these incidents involved a life or death situation and were it not for the bravery of these men and women, many more people could have lost their lives. These incidents were very diffic