Twenty arrests have been made in a UK-wide operation targeting suspected members of a Western Balkan organised crime group. 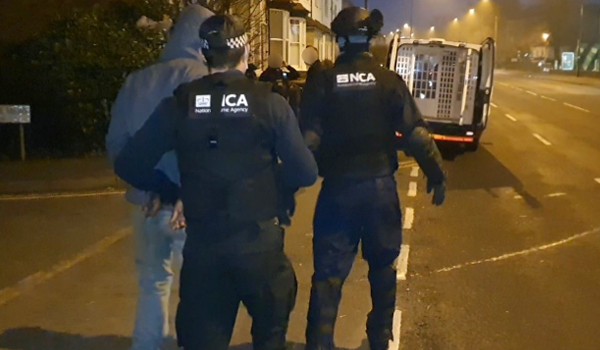 NCA officers making an arrest in a residential area.

It follows an eight-month long investigation, led by Thames Valley Police, into the “high harm network” responsible for the importation and distribution of Class A and Class B drugs, fraud, money laundering, modern slavery and human trafficking.

Thames Valley Police officers, supported by around 100 specialist officers from the National Crime Agency (NCA) – including dog handlers and forensic officers, the South East Regional Organised Crime Unit (SEROCU) and the Home Office, raided 18 addresses in Reading and a further seven across Blackburn, Sunderland, Birmingham and London on Wednesday (March 3).

One of the suspected heads of the group – a 36-year old man – was arrested by NCA officers at an address on Pershore Road in Birmingham on suspicion of conspiracy to produce and supply Class B drugs.

The NCA also led raids on locations in the North West, North East and London. Two arrests were made by NCA officers in Sunderland, where two working cannabis factories were found.

A further cannabis factory was discovered at an address in Southgate, North London, where two Albanian nationals were arrested, and another arrest was also made at a location in Blackburn, where investigators found a premises they think had previously been used for cannabis production.

A significant amount of cash, drugs, weapons and other items were also seized during the raids.

“They are involved in various forms of serious and organised criminality, including the trafficking and supply of Class A drugs, organised immigration crime and corruption,” she added.

“Identifying and targeting these high harm networks requires a whole-system law enforcement approach, and anyone involved in widespread organised crime should take notice that the NCA and partners will do all we can to disrupt their activity and ensure they face justice”.

Detective Inspector Natalie Hall, of the Thames Valley Police Serious Organised Crime Unit, said: “This partnership working is vital in identifying and disrupting the most harmful individuals and organised crime groups in order to protect our communities.

“Tackling serious organised crime is a priority for Thames Valley Police, and we have dedicated Stronghold teams who focus on targeting those bringing drugs into our communities, and to cut off supply to those dealing locally.

“Investigating this type of criminality can be complex and time-consuming and this particular operation has been a culmination of months of hard work by officers. Therefore, I am pleased that we have been able to carry out these warrants and make a number of arrests.

“Further, I hope that this serves as a warning to those in the community who are involved in the supply and distribution of drugs as well as the exploitation of people, that we know who you are, where you are and we are committed to bringing you to justice.”