Almost one in seven cigarettes smoked in the UK have been sold illegally, according to new research. 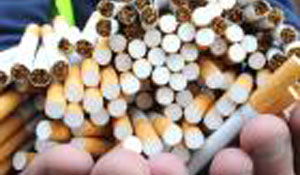 Almost one in seven cigarettes smoked in the UK have been sold illegally, according to new research. Data from the Royal United Services Institute (RUSI) shows Britain remains one of the largest consumers of illegal cigarettes in Europe with 5.5 billion counterfeit products on the market. This illicit trade is so large that the UK lost out on 2.1 billion (£1.84 billion) in tax revenue in 2016  while Europe as whole lost 10.2 billion. However, the proportion of counterfeit cigarettes on sale dropped 17 per cent from the previous year, largely due to increased pressure from law enforcement. Cathy Haenlein, RUSI research fellow for serious and organised crime, said gangs operating in this market face considerably lower risks than other criminals. She added: Across Europe, law enforcement has typically focused on more visible criminal activity  particularly drug trafficking  which is perceived to pose a more immediate threat. Meanwhile, the profits to be made can be just as significant as those attached to higher-risk crime. With low production costs, illicit cigarettes are lightweight and easy to transport, yet retain a high sale value and consistent consumer demand. The figures, revealed in a report published on Tuesday (July 4), show the counterfeit cigarette market across Europe shrunk by 8.8 per cent as 48.3 billion products were sold. The RUSI estimates that illegal cigarettes now account for 9.1 per cent of consumption throughout the continent.