The first-ever mini police initiative in Wales has been launched by Gwent Police to provide a great opportunity for youngsters to help make a difference in their community and to educate fellow pupils. Created and developed by PC Craig Johnson from Durham Police for children aged between nine and 11, the engagement programme has already been successfully rolled out in Durham, Merseyside, Northumbria, Thames Valley and Lincolnshire. 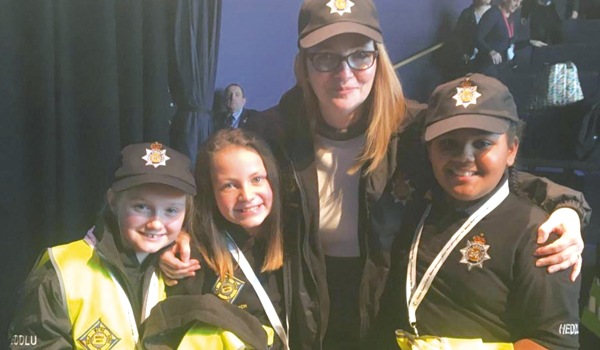 The first-ever mini police initiative in Wales has been launched by Gwent Police to provide a great opportunity for youngsters to help make a difference in their community and to educate fellow pupils. Created and developed by PC Craig Johnson from Durham Police for children aged between nine and 11, the engagement programme has already been successfully rolled out in Durham, Merseyside, Northumbria, Thames Valley and Lincolnshire. Gwent Police Chief Constable Julian Williams said they were extremely pleased to be launching the worthwhile Heddlu Bach Mini Police Officer scheme. This is a great opportunity for the mini officers to help make a difference within their community and to educate their fellow pupils in their schools, he said. This scheme will give them a voice to feedback what matters most to them and they can help influence those around them in a positive way. Its fantastic that these pupils nominated themselves and wanted to get involved and Id like to congratulate them all. Were hoping they will love their time as a Gwent mini police officer. Three schools from Newport will be the first to adopt the scheme with 58 pupils from Millbrook Primary, Ringland Primary and Pill Primary being among the first to become mini officers. The pupils, who will have their own branded Heddlu Bach uniform and all nominated themselves for the positions, faced an application process and in some cases an interview. The youngsters will attend training sessions on drill, public order, the force control room and Taser. They will also have six one-hour long lessons delivered to them throughout the year by school liaison officers and will get involved with community events such as litter picks, and look at issues raised by the community Your Voice process. They will also be working to educate their peers on issues such as anti-social behaviour. All the pupils received a certificate and a Heddlu Bach warrant card at the launch ceremony at the University of South Wales, attended by Mr Williams, police and crime commissioner Jeff Cuthbert and Kirsty Williams, Cabinet Secretary for Education. Mr Cuthbert said: My office were delighted to work with colleagues at both Durham and Gwent Police to introduce this exciting initiative to Gwent. We are thrilled about the potential of this programme and we see it as a great way of building trust and confidence in the police from a young age by directly involving and engaging with children in the communities we serve. The mini police initiative will provide a real taste of policing for children at an early age and will add value to our already well-established Gwent Police Volunteer Police Cadets programme. We have seen the positive impact this programme has had in other parts of the country with regards to building positive relationships between children and police officers. We really do have a golden opportunity here to inspire the next generation of police officers for Gwent. Ms Williams said the scheme allows children to engage with the local police and get involved in a number of community engagement events. I am sure the children taking part will emerge with more confidence and become great ambassadors for both Gwent Police and their local schools, she added.