The threat of being caught by police is nearly as strong a deterrent to using phones at the wheel as causing an accident, research has found. 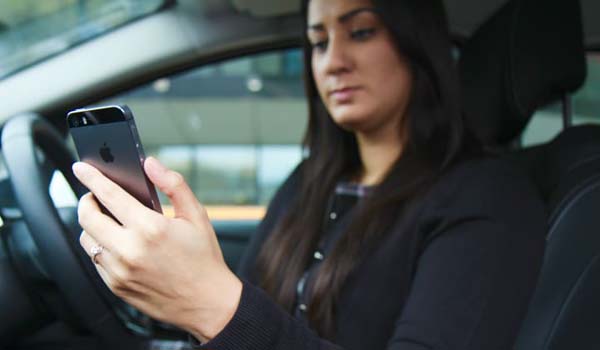 The threat of being caught by police is nearly as strong a deterrent to using phones at the wheel as causing an accident, research has found. Fifty-five per cent of motorists would stop using their phones while driving if they thought they were likely to be stopped, according findings from the RAC. Meanwhile, just six in ten said causing a crash would be enough to make them stop for good, suggesting many people still see nothing wrong with the behaviour. Figures released by then-Policing Minister Brandon Lewis in February showed there were just 4,934 roads policing officers working across England and Wales, down from 5,237 the year before. Traffic officer numbers fell in all but seven forces in 2016/17, with Northamptonshire Police experiencing the largest cut at 74 per cent. Jayne Willetts, roads policing lead for the Police Federation of England and Wales, said these specialist officers were stretched so thin they were almost to the point of being invisible. However, visible enforcement has increased since April, when the penalties for phone use while driving were doubled to six penalty points and a £200 fine. The figures were released on Monday (July 10) to coincide with forces across the country launching a week-long crackdown on the behaviour. The RAC also found that drivers are most likely to check their phones when stuck in traffic. However, 80 per cent of offenders would be willing to give up using their phones at the wheel entirely, with police cited as the group most likely to influence their decision. RAC road safety spokesperson Pete Williams said: Handheld phone use has become rooted in the behaviour of some drivers and it is going to take a herculean effort to change their mindset. No single action will achieve this and we need a combination of education so drivers understand the dangers, encourage them to give the habit up, and combine this with rigorous enforcement of the law, so those breaking the law can expect to get caught. Road Safety Minister Jesse Norman said: The message is clear: do not be distracted by your mobile phone while driving. Holding and using your phone at the wheel risks serious injury and even death to yourself and others. It is shocking that so many people still use handheld phones at the wheel, which is why Im calling on families and friends to make it as socially unacceptable as drink driving.