Two officers have been recognised for helping to make significant strides in the efficiency of roads policing. 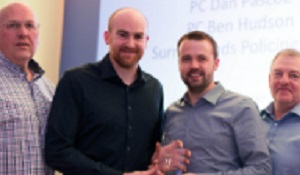 Two officers have been recognised for helping to make significant strides in the efficiency of roads policing. Police Constables Dan Pascoe and Ben Hudson won the outstanding contribution award at the Police Federation of England and Wales (PFEW) roads policing conference on Tuesday (January 30). The Surrey Police officers have pioneered the use of mobile data terminals in their force, which enables officers to complete forms electronically at the roadside. The technology can save officers and staff more than two hours per incident  enabling them to spend more time tackling crime. Both officers are also heavily involved in Operation Tramline, which uses an unmarked tractor to target phone-using commercial drivers. PFEW roads policing lead Jayne Willetts said: PCs Pascoe and Hudson are very worthy winners of this award  it is important we give deserved recognition to the work and contribution of roads policing officers. Dan and Ben have made significant strides in progressing technology that in future will enable officers to police the roads more effectively and efficiently to keep the public safe. I am delighted we are able to award this to such exemplary officers. Runners-up at the awards ceremony include Merseyside Police Constable Graeme Watson, whose work on vehicle tracking features has helped recover more than 54 cars valued at more than £1.1 million. PC Watsons experience was previously recognised by the College of Policing when it asked him to share his knowledge at the 2017 Digital Media Investigators Conference. The second runner-up was West Yorkshire Polices Team 5 West Safer Roads, which has established a proactive traffic operation alongside partner agencies. The team, comprising Police Constables Craig Blake, Richard Clarke, Ben Conlon, Felicity Davies, Timothy Harding, Richard Hirst, Andrew Howarth, Robert Hoyle, Daniel Pennington, Nicholas Priestly, James Sandford and Stephen Wright, has recovered more than £112,900 for HMRC. It has also seized more than 30 vehicles and made many arrests for serious offences.