Two London gang members running a county line drug operation have been convicted under human trafficking legislation after using a vulnerable young woman to transport and sell drugs in Wales. 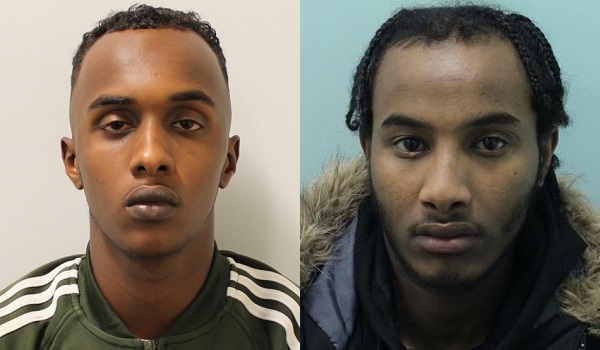 Two London gang members running a county line drug operation have been convicted under human trafficking legislation after using a vulnerable young woman to transport and sell drugs in Wales. On Tuesday (December 5), Mahad Yusuf, 20, and Fesal Mahamud, 19, from north London, pleaded guilty to trafficking a 19-year-old woman for the purposes of exploitation under the Modern Slavery Act 2015. They also admitted to conspiracy to supply class A drugs, and will be sentenced at Swansea Crown Court on January 4, 2018. Yusuf and Mahamud are the first County Line criminals to be sentenced under the Modern Slavery Act 2015. However, the Metropolitan Police Service (MPS) said this is not an isolated case, as drug dealers are exploiting vulnerable people across the country via County Lines. Operation Lindvi was launched on March 20 when the MPS was made aware of a London to Swansea County Line operated by members of a north London gang. On May 25, officers from Trident, in collaboration with South Wales Police, searched an address suspected of being used by the gang to supply class A drugs, and a 19-year-old vulnerable woman from north London who had been reported missing, was found. Through social media messages, officers learned how the gang had lured the woman into a car following a brief online conversation and drove her to Wales. It was there that she met Yusuf, who told her she belonged to him, and destroyed her mobile phone. The teenager was held at the address for five days, during which she was forced to store class A drugs against her will. Detective Inspector Rick Sewart, who led the investigation, said: “The victim in this case suffered a horrendous ordeal at the hands of these two men, who trafficked her for their own criminal gain. Unfortunately this case is by no means unique. Drug dealers are exploiting vulnerable people across the country via County Lines. This prosecution is a clear message to any drug dealer that if you exploit young people we will find you, bring you to justice and you will feel the full force of the law.” Detective Superintendent Tim Champion, lead responsible officer for the MPSs County Lines investigations, said: Drug supply is not new, however the exploitation of vulnerable young people by criminal networks, to move and supply drugs across the country, takes this offending to a new level. We will prioritise those criminal networks that exploit young persons and utilise all legislation available to disrupt their offending and safeguard those caught up in county lines. These offenders are trafficking young people to maximise their profits in the drug market and use of the Modern Slavery Act is a proportionate and necessary response. In this weeks digital edition of Police Professional, former Geoff Coliandris examins how methods of problem solving can help tackle complexities of County Lines drug dealing.