Tributes have been paid following the death earlier this year of retired Hampshire Constabulary Deputy Chief Constable Ian Readhead at the age of 65. 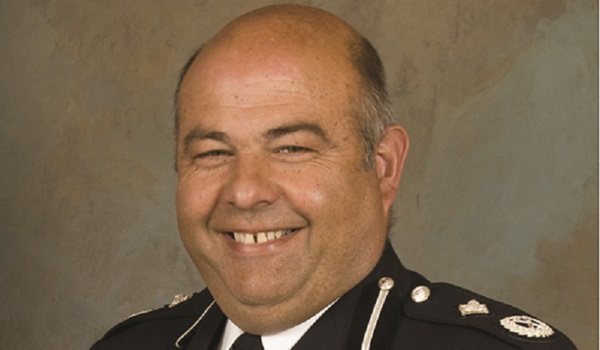 Ian died peacefully at his home, surrounded by his family, a wonderful husband, dad and grandad, having bravely lived with cancer for some time.

Ian made the most of every minute he was given, getting up at the crack of dawn each day, even on his days off, working tirelessly to give his family the best life he could. He was the person they would go to, whether it was for help in writing a letter, or changing a flat tyre, with spelling tests and interview scenarios, teaching them to drive, or cooking (especially at Christmas), continuing this on with his grandchildren. He could turn his hand to nearly anything, including fashioning emergency rainwear from a hastily-bought roll of bin-bags for the family when caught in a deluge of rain, much to the disgust of some his teenage offspring!

Ian loved his garden, growing vegetables, feeding the birds, cutting firewood, planting up flower pots or simply having a great big bonfire! His family and friends were extremely important to him, often entertaining with dinner parties, barbeques, parties, and quite often completing the event with his favourite: fireworks!

Born in Norley Wood, Lymington, Ian was a New Forest man through and through, coming from a commoning family. He attended Badminston, Fawley and Hardley Schools, leaving at the age of 16 in 1971 to join Hampshire Constabulary as a police cadet at Bishop’s Waltham, where he gained 10 O-levels, studying at Fareham Technical College. Thus commenced an outstanding career dedicated to the police service, and one of which he was hugely proud.

As a cadet, Ian gained his Duke of Edinburgh Gold Award, and was awarded a Commendation by the Governor of the Falkland Islands for saving children from a bush fire during his Voluntary Service Overseas attachment during 1973-74, teaching children out in the ‘camp’, the more rural areas of the islands. He later won the Lions Club Youth of the Year Award, and donated the £500 winning bursary to a camp for underprivileged children that he helped run at Avon Tyrrell, in the New Forest. It was here that he met his wife, Maggi, also a helper.

Ian devoted his life to policing and to protecting the people of Hampshire and the Isle of Wight, the UK and communities around the world. Throughout his service, rising through the ranks, Ian served at many stations across the constabulary including Hythe, Portsmouth Central, Fleet, Southampton Central, Fareham, Bitterne, Hulse Road, Andover, Lyndhurst and Police Headquarters, Winchester.

Ian took his sergeant’s exam, coming in the top 200 in the country, earning a place on the Special Course at Bramshill in 1978, a year-long residential course, just after getting married. Ian was then posted to Southampton, a city he later described as his ‘spiritual home’ after working and studying there for much of his career.

At 24, Ian was promoted to be the youngest police inspector in the county and one of the youngest in Britain. He was posted to Fareham where he oversaw the move to the new police station. He was one of the three high-trained inspectors instructed in leading public order units in Hampshire. He regularly commanded officers during periods of significant public disorder such as the miners’ strike, nuclear convoy movements from Newbury and Molesworth, and occasions such as the Battle of the Beanfield in Wiltshire.

Between 1979 and 1982, having won a scholarship to study at Southampton University, Ian was extremely proud to gain a Bachelor of Law degree, returning to work at Fareham during the educational breaks. In 1986 Ian joined the Traffic Department as a chief inspector at Hulse Road in Southampton, a location he remembered as ‘well-known to me, because it was the hostel for single men and as shift sergeant I often had the need to bang some doors early in the morning in order to ensure I had a full complement of officers on duty!’

He was posted to Andover in 1989 as a newly promoted superintendent. Two years after attending the first European Senior Officers’ Course in the Netherlands in 1992, Ian was promoted to chief superintendent of Western Division (his beloved New Forest), where he re-established partnerships with local authorities, restructuring divisions into a single unit to release resources back to frontline duties. That same year, he joined a team set up to help the state police of Slovakia with emergency planning to share best practice and resolve tensions with minority Romany communities who were living in disproportionately high rates of poverty.

The day Ian was told of his promotion to assistant chief constable in 1995 under Chief Constable John Hoddinott, was a literal bumpy ride. During a display of the Marine Unit to member of the Police Authority, Ian was unexpectedly airlifted from the police launch Earl Mountbatten by the coastguard helicopter. It was a day he said he never forgot.

Ian became deputy chief constable in 2000 under Chief Constable Paul Kernaghan, and took on national responsibilities including leading for Freedom of Information and Data Protection. He guided forces through the new legislation and established the National Referral Unit.

Ian presented ACPO evidence to the inquiry in the Soham murders, represented the police service in Romania, and gave briefings through the United Nations in Barcelona on command and control in emergency situations. Ian led the Mobile Information Programme Board, tasked by government with £50million of funding to enhance the use of mobile computer devices for frontline officers.

Ian’s distinguished police career was recognised by his award of the Queen’s Police Medal in 2006. He retired as Deputy Chief Constable in September 2008 after completing 37 years’ service.

There are very few areas of Hampshire Constabulary that Ian did not shape in some way, and many more areas in national and international policing that have been influenced by his commitment to community safety and catching criminals.

Ian was president of the British Association of Public Communications Officials, director and company secretary of the Chief Police Officers’ Staff Association, and a founding father of the Southampton Police Club Trust Fund, which was formed following the sale of the Hulse Road site. The funds it created are still used today to support the welfare of Hampshire Constabulary’s serving and retired officers and staff.

On top of his love of gardening and family life, Ian also found time to run the local Cubs’ football team in Hythe on Saturday mornings, following his philosophy that all boys get a chance to play, leading the team to win several trophies along the way.

Following his retirement from Hampshire Constabulary, Ian took on the role as the first chief executive officer of the Association of Chief Police Officers’ Criminal Records Office (ACRO) until his retirement in 2017. Ian’s vision and drive is acknowledged establishing ACRO an organisation dedicated to global community safety, raising its profile on the world-stage and developing pioneering international information sharing agreements.

During his time at the helm, Ian saw ACRO grow from a small operating unit in a portable cabin just outside Winchester to a thriving national police unit with a significant international profile. The criminal records information services ACRO provide grew under Ian’s direction, not just in demand but in range and scope too; notably taking on the co-ordination of subject access requests in 2009, the introduction of ECRIS in 2012 and the launch of International Child Protection Certificates the same year.

In 2015 Ian was awarded the honour of Officer of the Order of the British Empire (OBE) in recognition of his services to policing and public protection. By this time he had gained international recognition for his work from police chiefs around the world. Whether it was signing a Memorandum of Understanding with the United Arab Emirates, working with senior officers in Pakistan or the Caribbean, liaising with global ambassadors, or speaking to the media, Ian was always happy to lead on the discussions and negotiate the best outcomes for safer communities.

In 2017, Ian fulfilled a decade-long ambition to sign an agreement with the FBI to formalise the exchange of conviction data between the UK and the United States. It was a momentous achievement and one that has paved the way for a greater level of co-operation and information sharing between ACRO and its US counterparts ever since.

At the same time as leading ACRO, Ian also had responsibilities as Director of Information for the police service. It was a role in which he was instrumental in continuing to shape policy and leading policing through changes in data protection, records management and Freedom of Information

On his retirement in 2017, Ian said: “It has been a great privilege to be DCC of this force. Policing Hampshire has been my life, and I always strived to ensure that I have given my best for the communities we serve and the staff whom I represent.”

One of Ian’s most enduring legacies is Families’ Day, now an annual tradition in the Hampshire Constabulary calendar. He mostly organised the event for 20 years until his retirement as DCC, and continued to support it afterwards, becoming known as its ‘grandfather’ and the nickname of ‘Mr Netley.’ Speaking at the event in June 2008, he said: “It has also been a great privilege to help organise Families Day. When I started 20 years ago, we didn’t get any children. Just look around you now. This is what it’s all about. This is a family force, and I hope it always will be.”

Ian received outstanding support from Macmillan nurses and Oakhaven Hospice, which enabled him to spend his final days comfortably and at home with his family around him. Instead of flowers, the family request that donations be made to Macmillan Cancer Support or Oakhaven Hospice, Lymington. Sympathy is with his family, Maggi his wife, and his four children Paul, Stuart (both serving Police Officers), Rachel and Lizzee, and their families, at this sad time. They are determined that his spirit and legacy live on. Ian filled their lives with such knowledge, fun and laughter, and gave so many people memories that they will cherish forever.

A favourite family book was ‘The Twits’ by Roald Dahl. There is a quote from the book which reflects Ian perfectly – “If you have good thoughts they will shine out of your face like sunbeams and you will always look lovely”. Ian always wanted the best for everyone – family, friend, colleague or stranger.

Following his death, force flags were lowered throughout Hampshire and the Isle of Wight in respect.

Chief Constable Olivia Pinkney said of Ian: “For Hampshire and Hampshire Constabulary, Ian has left us with the most wonderful legacy and set the tone for this force in a deep and vital way. So much of what I have the joy and privilege to lead in this Constabulary was developed by Ian and on his watch. Described by colleagues as ‘Hampshire to his core’, Ian was ethical, visionary and generous with his time and wisdom, a great supporter of all our police family and mentor to so many. His leadership, service and kindness will be sorely missed.”